When humans first discovered natural diamonds around 3000 years ago, they immediately knew that the stones were special. In fact, some even believed that they possessed magical properties.

First called vajra, meaning ‘thunderclap’ in Sanskrit, some thought that natural diamonds were formed by lightning bolts; others theorized that they were the tears of god. As their rarity and value was realized, the enchantment around diamonds grew. Needless to say, it didn’t take long before the most special diamonds became the property of the world’s wealthiest and most influential people in history.

As it turns out, many of the prominent diamonds that drew astute purchasers were fancy colored diamonds, which have since passed through countless hands around the globe, adding to their fame and story. 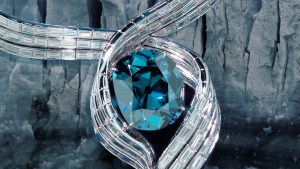 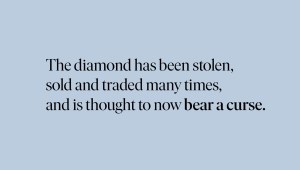 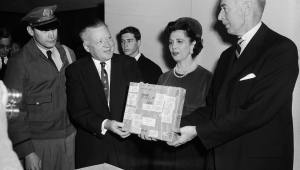 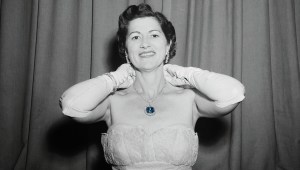 The Hope Diamond is one of the most admired and mysterious colored diamonds in the world.
Photo: Don Hurlbert / Smithsonian

The diamond has been stolen, sold, and traded… accumulating a long list of owners including King Louis XIV, Henry Philip Hope, and Pierre Cartier.

Eventually, Harry Winston donated the stone to the Smithsonian Institute, mailing the diamond to them using the US postal service.
Photo: Bettmann / Getty

It is there, in Washington, DC, where is it now visited by at least 3 million people a year.
Photo: Bettmann / Getty

Housed in the Smithsonian Museum in Washington, D.C., the Hope Diamond is the world’s most famous, garnering at least three million visitors a year. Its legacy begins with the legendary French merchant Jean Baptiste Tavernier, who purchased the then 112 carat diamond from the Golconda region of India. At the time, it was triangular and crudely cut. In 1668, Tavernier sold the diamond to King Louis XIV, who had the stone recut and set it in a neckpiece, naming it the “French Blue.” Later, in 1791, Louis XVI and Marie Antoinette attempted to flee France, turning over the diamond to the government from which it was ultimately stolen. Though Marie Antoinette’s beheading was the first of great hardships—and even deaths—that the diamond’s many owners have suffered, leading to what is now thought to be the curse of the Hope Diamond.

After its theft, history suggests that the diamond resurfaced in the early 1800s, recut into its current shape. King George IV acquired the stone until his death, when it is said to have been sold through private channels. Then, unexpectedly, the diamond resurfaced in 1839 under the ownership of Henry Philip Hope, from whom the diamond takes its name. The Hope family kept the diamond until 1901, when it was purchased by Pierre Cartier and sold to Mrs. Evalyn Walsh McLean, before being transformed into the diamond necklace we know today.

Famous jeweler Harry Winston became the next owner of the diamond, showcasing the stone at exhibits and charity events for ten years before donating it to the Smithsonian Institution in 1958. Amazingly, Winston sent the diamond from New York City to Washington, D.C. via none other than the United States Postal Service.

Now known to weigh 45.52 carats, the Hope Diamond is classified as a fancy dark grayish blue. Perhaps its most peculiar characteristic is that it glows a strong red color for several seconds after being exposed to ultraviolet light, a phenomenon called phosphorescence. Today’s value for such incredible rarity and historical significance? A cool $400 million.

The Tiffany Diamond: One of the World’s Finest Natural Yellow Diamonds 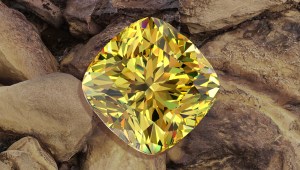 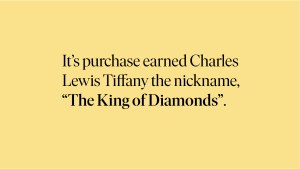 To honor its 175th anniversary, Tiffany & Co reset the diamond into a setting with 481 additional diamonds.

Among the world’s finest yellow diamonds, the Tiffany Diamond was discovered in South Africa’s famous Kimberley diamond mine, weighing a whopping 287.42 carats. It was sold to Charles Lewis Tiffany, the founder of Tiffany & Co., for approximately $18,000, a fortune at the time.

Cutters studied the rough stone for an entire year to determine how to maximize its beauty. Finally, it was cut into a 128.54 carat cushion shape brilliant unlike any stone before. It traveled the world as a loose stone in exhibitions until being mounted for the 1957 Tiffany Ball, and worn by Mrs. Mary Whitehouse, the first of only three women who have ever had the privilege of dazzling in it.

Since then, the gem has been mounted into three other pieces of jewelry, two of which involved original designs by famous designer Jean Schlumberger. Schlumberger’s Ribbon Rosette necklace setting was the first, worn by Audrey Hepburn to promote and briefly appear in the film Breakfast at Tiffany’s. In 1995, it was placed in Schlumberger’s Bird on a Rock setting for a museum exhibition. And most recently in 2012, for the celebration of Tiffany’s 175th Anniversary, the Tiffany Diamond was set in a necklace featuring over 100 carats of other diamonds, and later slightly modified for Lady Gaga to wear to the 2019 Oscars in one of the all-time greatest red carpet jewelry moments. 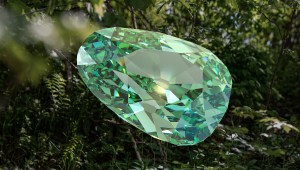 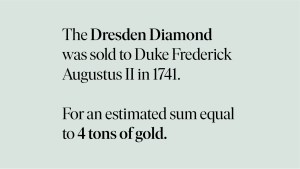 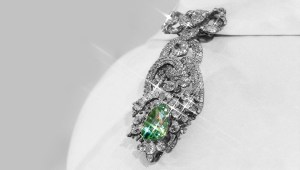 The Dresden Green Diamond was sold to Duke Frederick Augustus II in 1741.

For an estimated sum equal to 4 tons of gold. It was set in a badge of Golden Fleece, a prestigious symbol of chivalric order in Europe.

It is the largest natural green diamond to ever exist.
Photo: Toru Yamanaka / Getty

Another historic colored diamond is the Dresden Green diamond. Its long history is thought to have begun around 1722, when it was first mentioned in a London newspaper. The diamond was purchased in 1741 by Frederick Augustus II, whose father, Augustus I, had accumulated an impressive collection of jewels as the ruler of Saxony, the capital of Dresden. Augustus I set aside a group of rooms in Dresden Castle to house his treasures, naming them the Green Vault. His son’s purchase of the green diamond added a cherry on top of an already brilliant collection.

Commissioning the goldsmith Pallard in Vienna, the Dresden was designed into a Golden Fleece hat ornament set with many other diamonds. Perhaps the most incredible fact about this diamond is that some 200 years later, it still exists in the same setting. From then on, the Green Vault containing the diamond more or less remained open, operating as a museum, until tragedy struck. In 2019 perhaps the largest heist of any kind took place there: over $1 billion worth of diamonds and other valuables were stolen. Miraculously, the Dresden Green diamond was on a rare loan to the Metropolitan Museum of Art in New York and escaped loss. To this day, the perpetrators of this heist have never been caught. 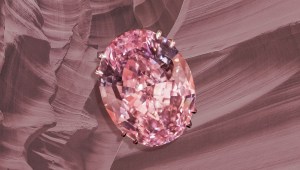 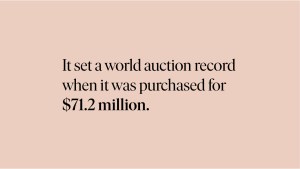 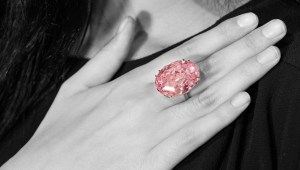 After the purchase, chairman of Chow Tai Fook renamed it CTF Pink Star in memory of his father.

CTF Pink Star is a Type IIa: stone, a subgroup of the most chemically pure diamonds that make up less than 2% of all gem diamonds in the world.
Photo: Ian Gavan/Getty Images for Sotheby’s

Of course, not all famous diamonds have hundreds of years of history. Over the last few decades, we have been lucky enough to continue finding extraordinary diamonds, among them the Pink Star. Previously known as the Steinmetz Pink, the gem was discovered by the DeBeers Group in 1999, weighing 132.5 carats in its rough form, and was sold to diamond cutters by the name of the Beny Steinmetz Group. Steinmetz took 20 months to cautiously cut the stone in order to preserve its incredible pink color.

The finished product: a GIA-graded Fancy Vivid Pink stone of 59.60 carats, the largest known of this color. The diamond was exhibited in museums until being auctioned by Sotheby’s in 2013 at a sale price of $83,187,381, a world record for any gemstone. But the buyer never settled the auction price, and it was again added to Sotheby’s inventory eventually selling in 2017 to Hong Kong jeweler Chow Tai Fook for $71.2 million,  making it the most expensive diamond ever sold at auction.

These famous colored diamonds are exceptional beyond words and, in many cases, even beyond value. Their colors give new meaning to the term rare, born from the perfect natural alignment of atoms and geological conditions. Pair extreme rarity and intrinsic value with years of history, and you have a combination of factors that cannot be replicated by any other object on earth. Whether famous or not, all diamonds have a long history, starting a billion or more years ago to the present, regardless if they live on your finger, in a museum or still in the ground waiting for their big debut.