Elizabeth Taylor was a multihyphenate (actress-humanitarian-entrepreneur) long before major multitasking was in fashion. She racked up Oscars, raised millions as a philanthropist, and more than a decade after her death, her perfumes still get spritzed on wrists the world over. The cinematic campaigns introducing her scents, especially the iconic White Diamonds, which featured images of the violet-eyed star outfitted in appropriately dazzling treasures. In one unforgettable scene, she tosses a high-carat earring into the kitty of a poker game to fund a handsome young gambler with the comment, “These have always brought me luck.” The ultimate big-shot move. She exuded authentic Hollywood glamour, and no one doubted for a moment that she or her jewels were the real thing. And since Elizabeth Taylor diamonds have been one of the greatest treasure troves of jewelry in modern history, many of the jewels she wore were her own—along with a few guest stars for good measure.

This highlight reel of some of Taylor’s fragrance campaign appearances, whether in vintage photos or photography from her grand dame years, proves that the superstar and her eye-popping natural diamonds were made for the spotlight.

There’s a lot to be said for simplicity. Who needs more when you have a 33.19 carat Asscher cut diamond ring at your disposal? The gift from Richard Burton (bestowed in 1968 during the first of their two marriages) might be one of the most famous diamonds associated with Elizabeth Taylor. She wore it regularly, including in films (the ring appeared in the film Boom and—in animated form—on The Simpsons). Moreover, theatrical spirits had an affinity for the ring. Taylor was the second famous actress to own it, after German performer Vera Krupp who once gave the diamond her name. Renamed the Elizabeth Taylor diamond after her death, when she owned the ring Taylor referred to it as “my baby.” It sold at Christie’s in 2011 for more than $8,800,000.

While the diamonds owned by Elizabeth Taylor mainly came from Blockbuster Maisons—Bulgari, Cartier, Van Cleef & Arpels—she also had a soft spot for vintage pieces, especially when they came from one of the men she considered one of her true loves, film producer (and husband number three) Mike Todd. Elizabeth Taylor’s diamond necklace in this famous image of Taylor is a Belle Epoque jewel that dates back approximately to 1900, and features old mine diamonds set in platinum. She paired it with a pair of girandole ear pendants that have the look of Georgian treasures. While the original version Todd purchased was set with paste stones, he later replicated the earrings in diamonds, proving there’s no substitute for natural diamonds.

Tiaras are overdue for a renaissance, at least beyond royal circles. When Taylor received this scrolling circa-1880 design set with old mine diamonds in platinum and gold, they weren’t necessarily at their peak of popularity. However, the young English Queen Elizabeth II helped change that somewhat. Thankfully, Elizabeth Taylor was never one to let convention come between her and an opportunity to wear extravagant diamonds. She debuted the gift from Mike Todd at the Academy Awards in 1957. At the 2011 Christie’s auction of Taylor’s treasures, it was one of the most prized lots, realizing over $4,200,000.

And when the jewels didn’t come from her personal collection, diamonds loaned by a superstar jeweler made quite the guest appearances. In a 1987 image shot by Norman Parkinson for Taylor’s debut fragrance, Passion, Taylor was adorned in a high jewelry diamond bib necklace and pendant earrings from Harry Winston that filled the image with flares of light. She had ample experience with the work of the American high jewelry house. The immense 69.42 carat flawless pear-shaped diamond Taylor received from Richard Burton in 1969 was cut by Harry Winston from a 241 carat piece of rough just a few years before. After Burton lost out in a bidding war for the diamond at auction, he bought it from the winning party (Cartier, no less) the next day. Now known as the Taylor-Burton diamond, Taylor subsequently auctioned the jewel to contribute funds to build a hospital in Botswana. Parting with one of her precious natural diamond jewels required a very good reason. 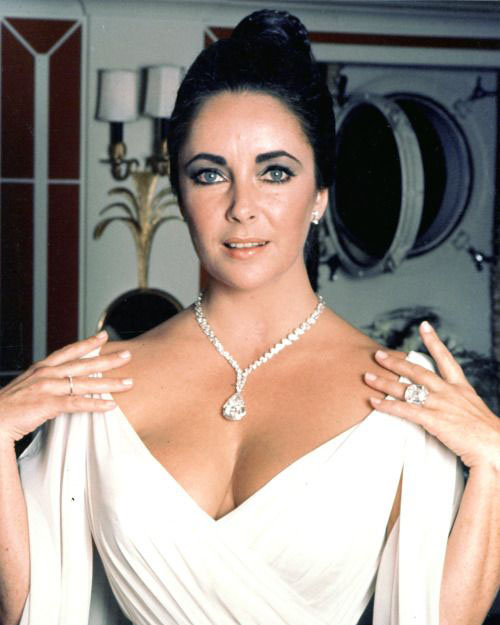