The Van Cleef & Arpels The Art of Movement exhibit held in England is a stunning curation of nearly 100 creations from their extensive archive and celebrates the Maison’s ingenuity and innovation through spectacular design encapsulating “movement” in all its glittering forms. The exhibition consists of four main parts that transport visitors through an extensive history of breathtaking jewelry which stretch the limitations of modern design.

Beginning with “Nature Alive” we see pieces depicting flora and fauna at the fleeting moment of its first bloom in stunning technical form. Jewelry enthusiasts will be in awe of The Bellflower clip from 1969, which uses the Mystery Set technique patented in 1933, where individual hand-cut sapphires are placed one by one into a system of gold rails “mysteriously” hiding their mounting. A unique technique originally reserved for flat topped items like powder cases, in 1935 the Mystery Set began to be applied to more intricate surfaces and organic shapes as we see here-a testament to the Maison’s prowess in technical craftsmanship.

Perhaps the most literal category of movement, “Dance” showcases the signature bond between Van Cleef & Arpels and the world of dance, dating back to the 1920s when Louis Arpels took his nephew Claude to the Opéra Garnier in Paris (a short walk from the Maison’s Place Vendôme boutique). The live ballerina’s spirit and elegance served as inspiration for the very first Dancer clips, created in 1941with tutu’s swirling in precious stones and endless grace.

The female figures on display here have their feet perfectly poised and skirts slightly lifted as if to greet visitors. Earlier Dancer clips can be identified by their solid gold heads, while newer iterations typically feature rose cut diamonds in their place and a wider array of dance practices depicted, exemplified by the Balinese dancer clip from 1969. The section as a whole is an effortless continuation of the Maison’s extensive support of British dance programs across the UK, at the Royal Opera House, Tate Modern and Sadler’s Wells.

Van Cleef & Arpels has drawn inspiration from the world of couture since its 1906 inception, crafting pieces of supreme luxury that are as flexible in purpose as they are in form. The designs displayed within the “Elegance” category fittingly echo the wearer’s movements through technical design and precious materials which mold themselves to the wearer’s body, effortlessly moving with them. The culmination of this is a key piece for the exhibition and one of the Maison’s most avant-garde – The Zip necklace.

This astonishingly technical design is now a Maison signature. Originally the zip had been purely a practical item, used to fasten aviator jackets and sailor uniforms before appearing for the first time in haute couture collections of designers in the 1930s including Elsa Schiaparelli. Inspired by this, Artistic Director Renée Puissant patented his design in 1938, but it took ten years to physically bring the piece to life as an instant icon in 1950. Expertly crafted in gold twill and framed by staggered gold-outlined hearts set in alternating diamonds and emeralds, the overall appearance mimics that of fine lace. Fully functional and convertible, the necklace can transform into a bracelet by simply sliding the tassel (as you would a real zipper) to transition into a wearable bracelet. Can’t make up your mind about how to wear it? The owner had the bright idea to order a second identical piece, so she could wear the design as both a bracelet and necklace at once.

Even movement through mechanical engineering is showcased in this section, with the Mystery IV plane necklace from 1956 in platinum, yellow gold and diamonds. Commissioned by French engineer and industrialist Marcel Dassault, Van Cleef was asked to create a necklace for Jacqueline Auriol, France’s first woman test pilot. The yellow gold plane taking off through the side of the necklace is a replica of her aircraft Mystery IV, and the flexible golden mesh cascading with graduating diamonds set in platinum creates a genuine impression of speed and the jet stream clouds produced by aircraft billowing in the sky behind them.

Finally, we find modern shapes through precious materials sculpted into “Abstract Movements” where pieces reference artistic movements using reimagined shapes and materials throughout the 20th century. Don’t miss the minaudières on display; meticulously decorated boxes from the 1930s to hold one’s closest possessions – a solution reportedly inspired by Mr. Van Cleef’s disgruntled sighting of a woman haphazardly throwing her lipstick and mirror into a Lucky Strike cigarette carton when out on the town. 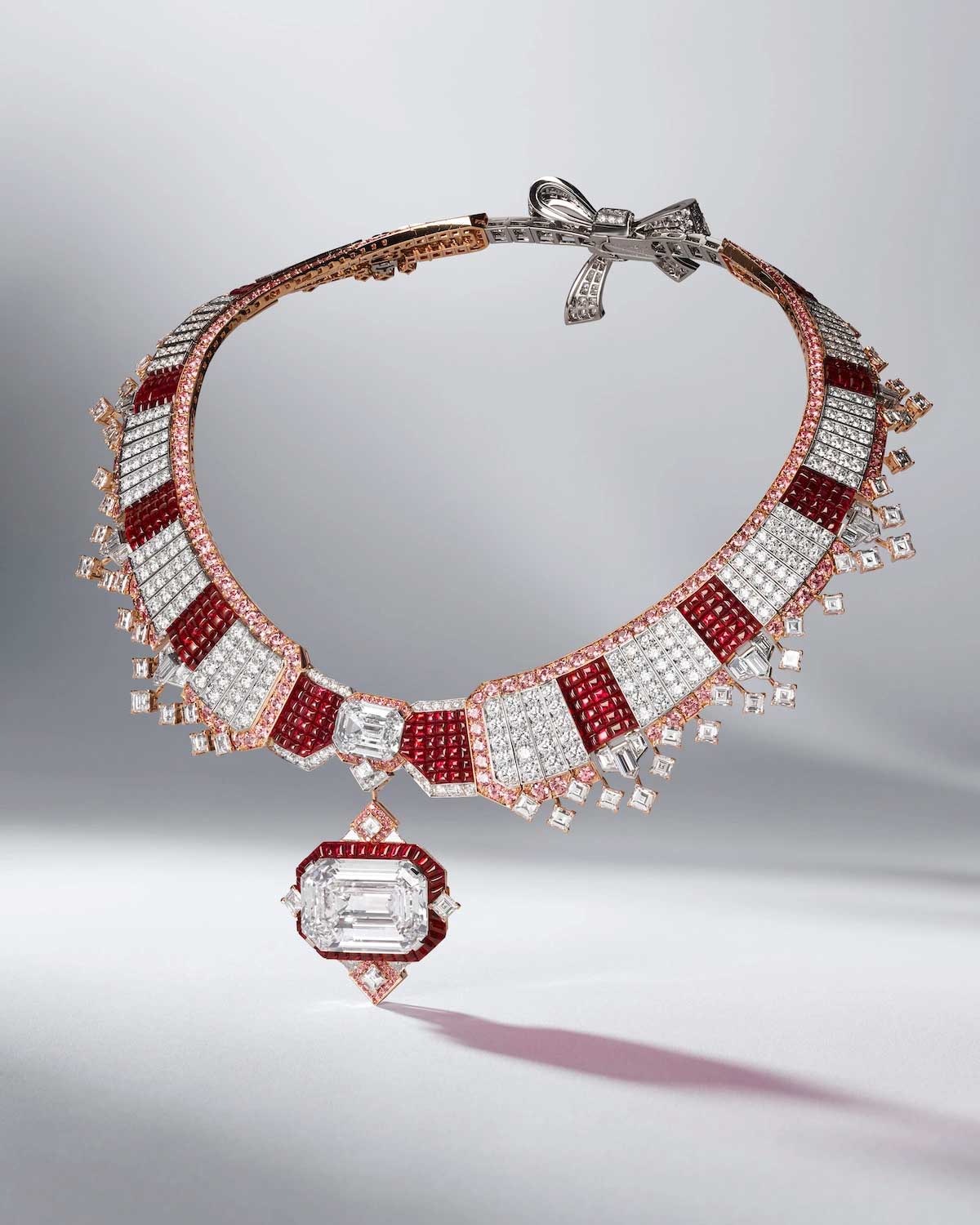 END_OF_DOCUMENT_TOKEN_TO_BE_REPLACED

The Design Museum is a perfect host to Van Cleef & Arpels’ first exhibition in London. The building encompasses several disciplines and boasts an impressive roster of previous fashionable exhibitions including shows from Azzedine Alaïa and Christian Louboutin. With Van Cleef’s jewelry design featuring such engineering and innovation, their archival pieces align perfectly with The Design Museum’s ethos. Best of all? Entry is free.

The Art of Movement by Van Cleef & Arpels is on show at The Design Museum in London through October 20th. For more information visit designmuseum.org.

Are Diamonds Getting Bigger?

Diamonds in Her Hair: All About the Tiara

When Christie’s is Your Playground

5 Unforgettable Diamond Necklaces According to “The Diamonds Girl” Tracey Ellison