Couples searching for commitment and engagement rings want to express their individuality, but at the same time, they want to find a timeless natural diamond ring that will last a lifetime … or at least a few decades. The east-west setting is the unisex style of ring for both men and women. By simply turning the stones on their side, classic diamond cuts—such as emerald, pear, oval, and marquise cut diamonds—are given a fresh perspective.

Over the years, the east-west setting has caught the attention of a number of celebrities looking to express their sense of style with a unique engagement ring. Kate Beckinsale married Len Wiseman with an emerald-cut diamond flipped on its side, and Portia de Rossi wed Ellen DeGeneres with a horizontal marquise-cut diamond on a twisted band covered in diamonds. Catherine Zeta Jones wears a stunning east-west marquise diamond ring given to her by husband Michael Douglas. These days, the look has broad appeal and is featured by jewelers around the world at every price point.

“People are looking for designs that are more pure and modern, and ways of wearing diamond jewelry that feel personal and unique,” says Valérie Messika, founder and creative director of Messika Paris, musing over the appeal of the east-west engagement ring. “I like this new generation of design that challenges the traditional codes of high jewelry, and we know perfectly well how to break the codes.” Messika’s new collection features ring styles with pear-shape diamonds set horizontally in the east-west way.

“I love this style ring because it’s different, clean, and modern looking.”

“I personally love the east-west style because it’s a little more casual and wearable for every day,” says Eve Goldberg of William Goldberg, a family-owned William Goldberg diamond company that creates some of the world’s most magnificent diamond jewels. “I love this style ring because it’s different, clean, and modern looking.”

It’s an all-around style that can showcase the striking geometry of large diamonds cuts in modern and minimalist settings (check out examples from William Goldberg and Kwiat), but is equally stylish with smaller stones in delicate gold settings (Anna Sheffield, Jacquie Aiche, and Michelle Fantaci are just some of the designers showing these artistic variations). For a totally different twist on east-west, London-based designer Glenn Spiro boldly sets large brown & white diamonds in bronze, wood, and gold.

The sleek, minimalist ring style of the east-west setting is easily adaptable for men’s ring styles. David Yurman is one of the many designers offering modern rings for men with diamonds discreetly set horizontally in wide gold bands. Clearly, many men want to wear diamond jewelry but prefer a more understated look.

It’s classic with a twist.

Couples want something unique but don’t want to stray too far from tradition when selecting a ring. Giving a stone the horizontal treatment looks modern without being trendy.

If you inherited a family diamond ring, it’s easy to reset the central natural diamond in a newly created east-west design. It’s about highlighting the beauty of the stone—its sparkle and diamond shape—in a new design that celebrates the heirloom while making it all your own.

It’s not new, but it’s clearly one of the hottest styles today.

“The east-west ring has always been a great option,” says Goldberg, who showed oval diamonds set sideways several years ago. Still, there is no denying its time has come, as women desire individuality and understated elegance. “Today, women aren’t looking for jewelry to keep in the vault, but pieces they can wear every day, and the east-west style ring just works.” 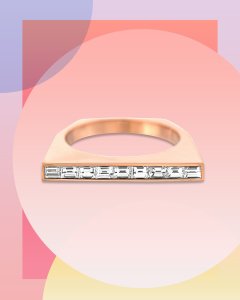 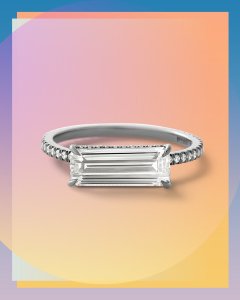 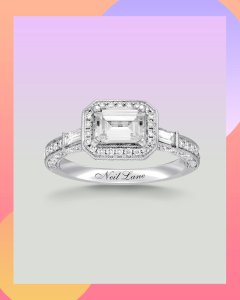 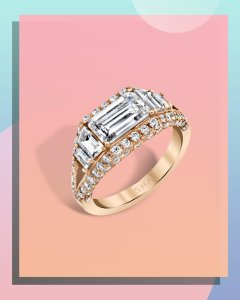