An engagement ring is the most significant piece of jewellery that a designer brand can design for a customer. I feel fortunate to have had the chance to design bespoke engagement rings for different couples across the globe. Love is, perhaps, one of the most powerful emotions and an engagement ring is a physical embodiment of every feeling that culminates into an everlasting love.

I believe the engagement ring is an eternal symbol of love, commitment and holy matrimony, the origins of which are rumoured to originate in Egypt, where the shape of a circle was a symbol of eternity. An age-old tradition, ancient Egyptians believed circles were symbols of eternity and endlessness. Historically, wedding and engagement rings were made of braided reeds. There are several beliefs, stories, and myths of how the ring finger gained popularity but one of the most popular ones is that the ancient Egyptians believed that the fourth finger on our left hand has a vein that leads directly to the heart.

The Anatomy of an Engagement Ring This long established symbol of love and commitment has gone through a significant number of changes to become what it is today. The twinkling star on the ring finger is metaphorically the light of love that unites two people. While it does just that, it is also an object of grand complexities. An engagement ring generally has a large centre stone, mounted on a metal band. The centre diamond, set in gold or platinum can be held up by various settings: 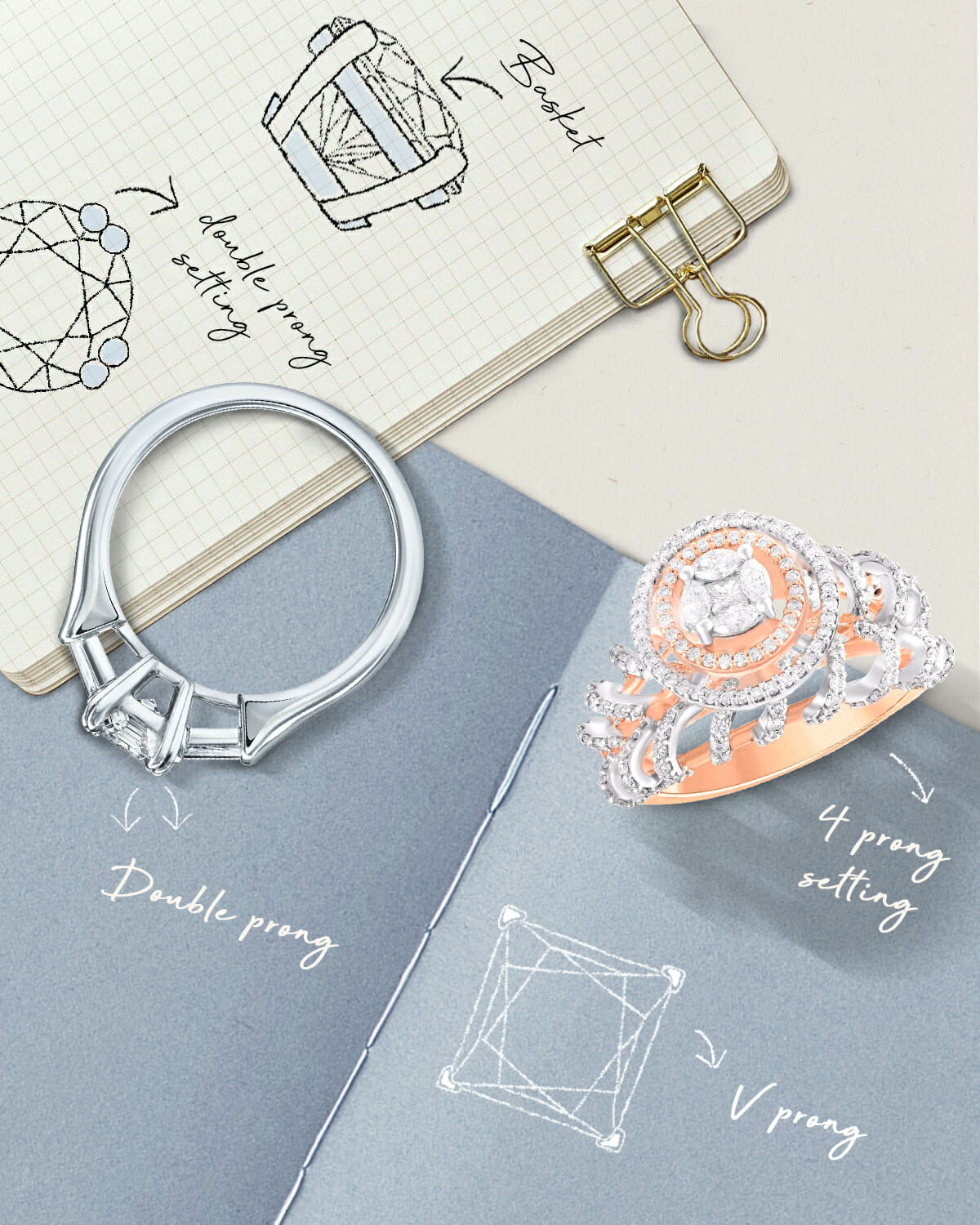 This setting could have 4, 6 or more prongs that extend up from the ring’s basket and over the gemstone.

V-Prong
As the name suggests, this setting shaped like the letter V, grip the stone at its sharp ends and hold it along the edges, from top to bottom.

Double Prong Claw
This settings consist of paired single claw prongs and are used most commonly on shapes with rounded or cut corners, like radiant cut, emerald cut, and cushion cut diamonds.

Basket
A basket setting is a type of prong setting where four or six prongs rise up from the base of the metal band for the stone to sit in, but then more horizontal prongs are added to create a ‘basket’ shape. 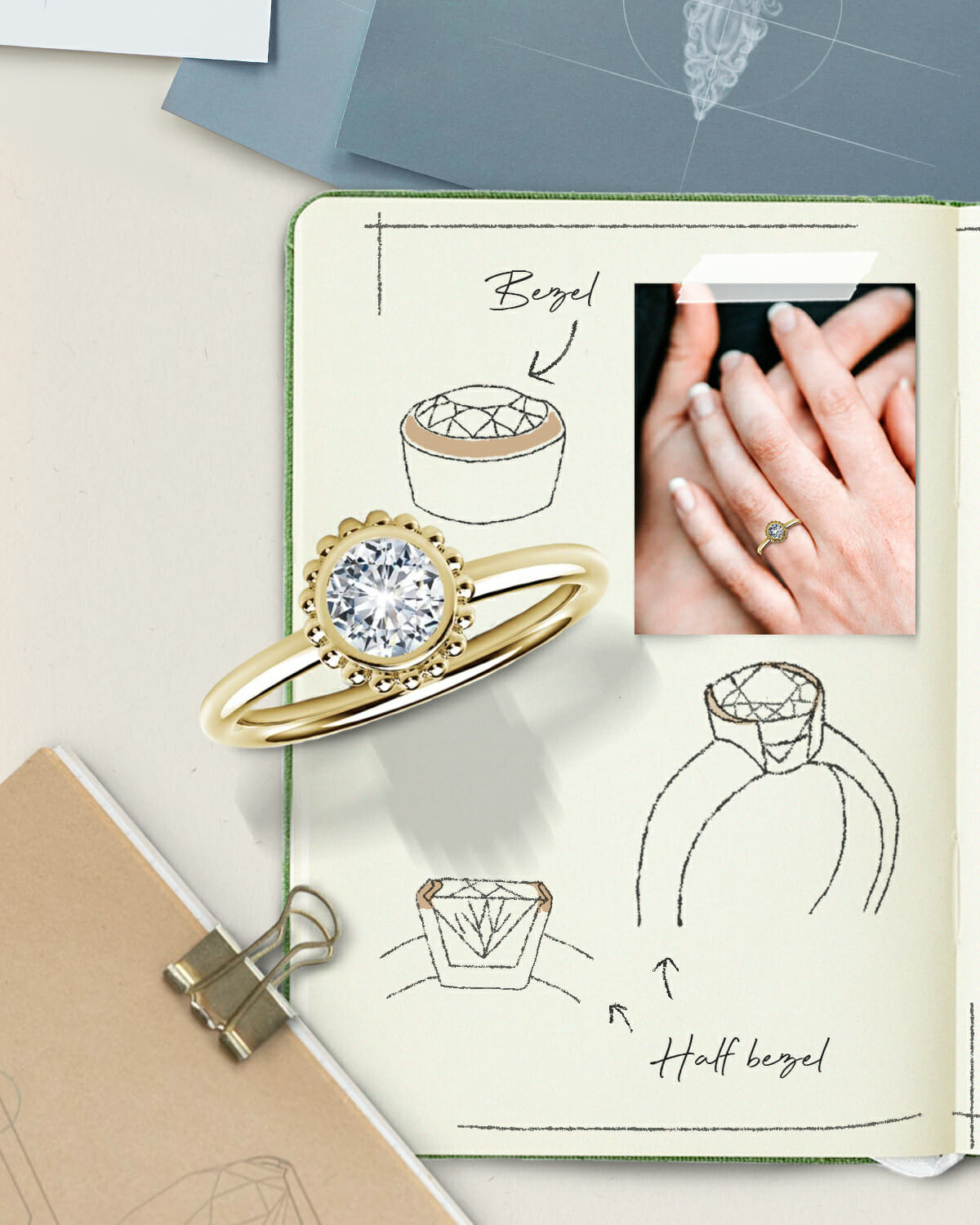 Bezel and Half Bezel

Bezel
A bezel setting is one where the diamond is surrounded by a metal rim rather than clutched by the four or six prongs evident in the popular claw setting.

Half Bezel
A partial bezel or half bezel with a pavé band, leaves the sides of the bezel open, allowing more light to enter the diamond from the sides stone to sit in, but then more horizontal prongs are added to create a ‘basket’ shape. 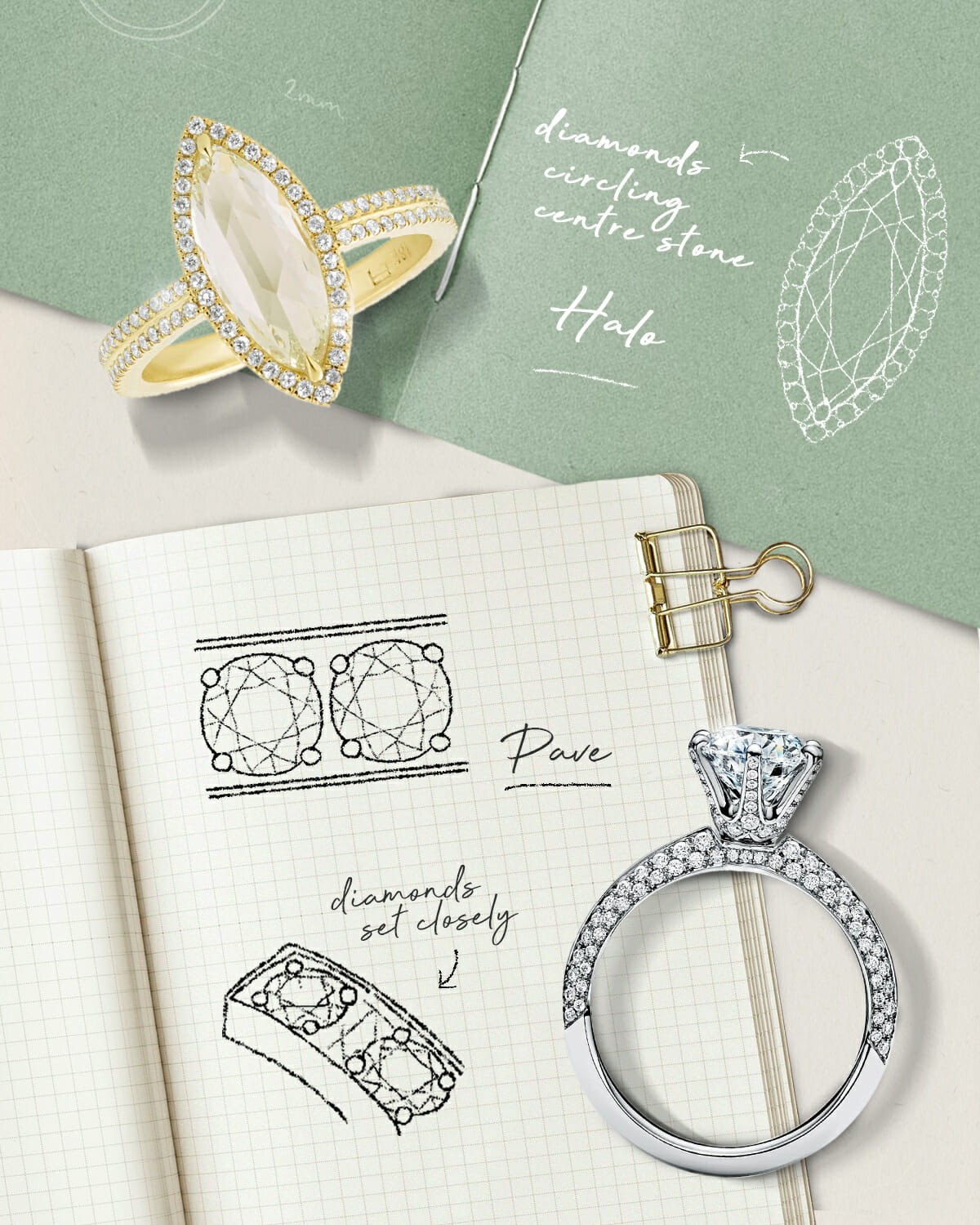 Halo
In this setting, small accent stones encircle the larger center stone to enhance its appearance with a stunning sparkle.

Pavé
In this setting, small diamonds are set closely together along the band of the ring to accentuate the center stone. 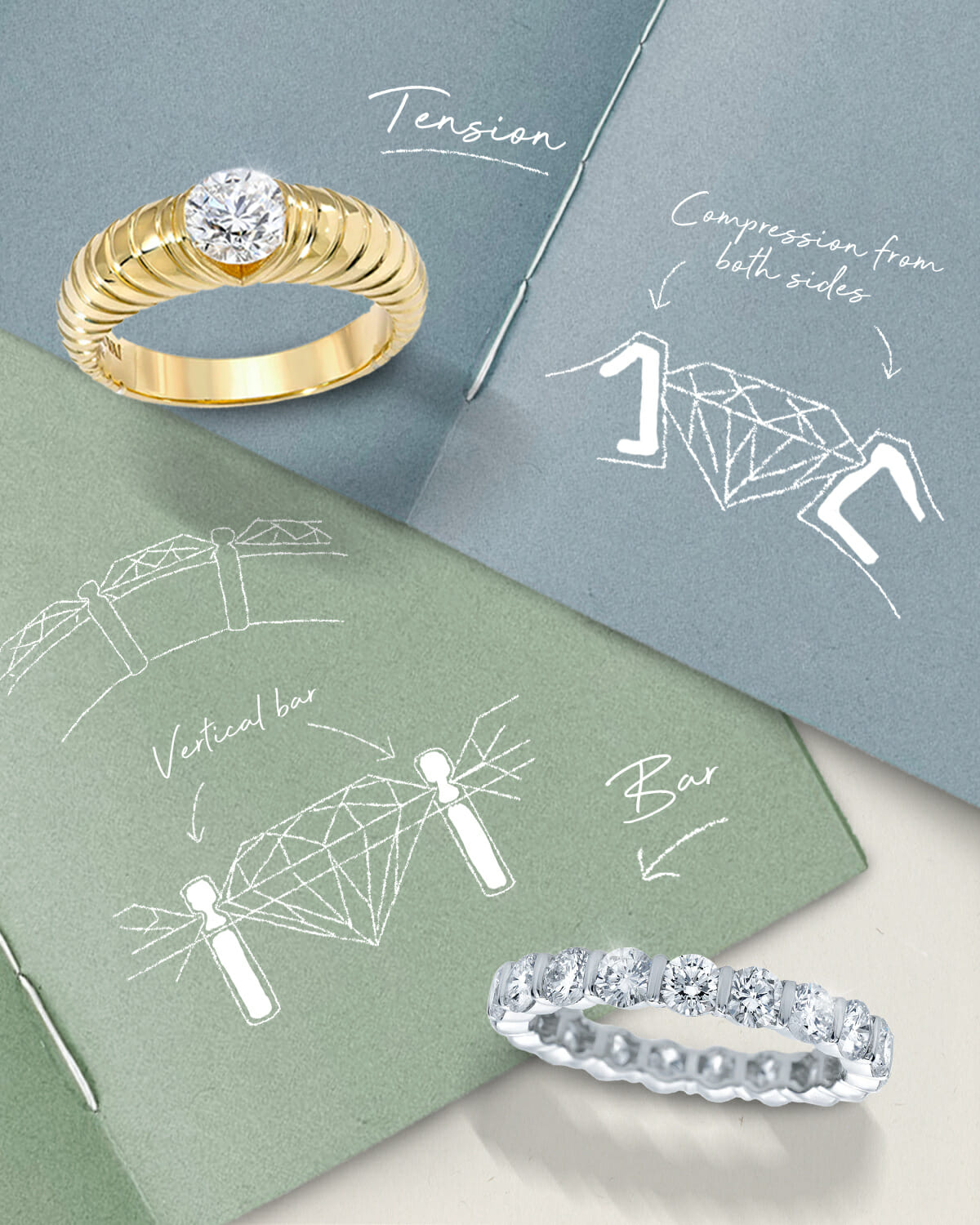 Tension
This setting uses compression to hold a center diamond or gemstone in place.

Bar or Channel
In this setting, the stone is held in position by two long, thin vertical bars carefully placed on either side of the stone. 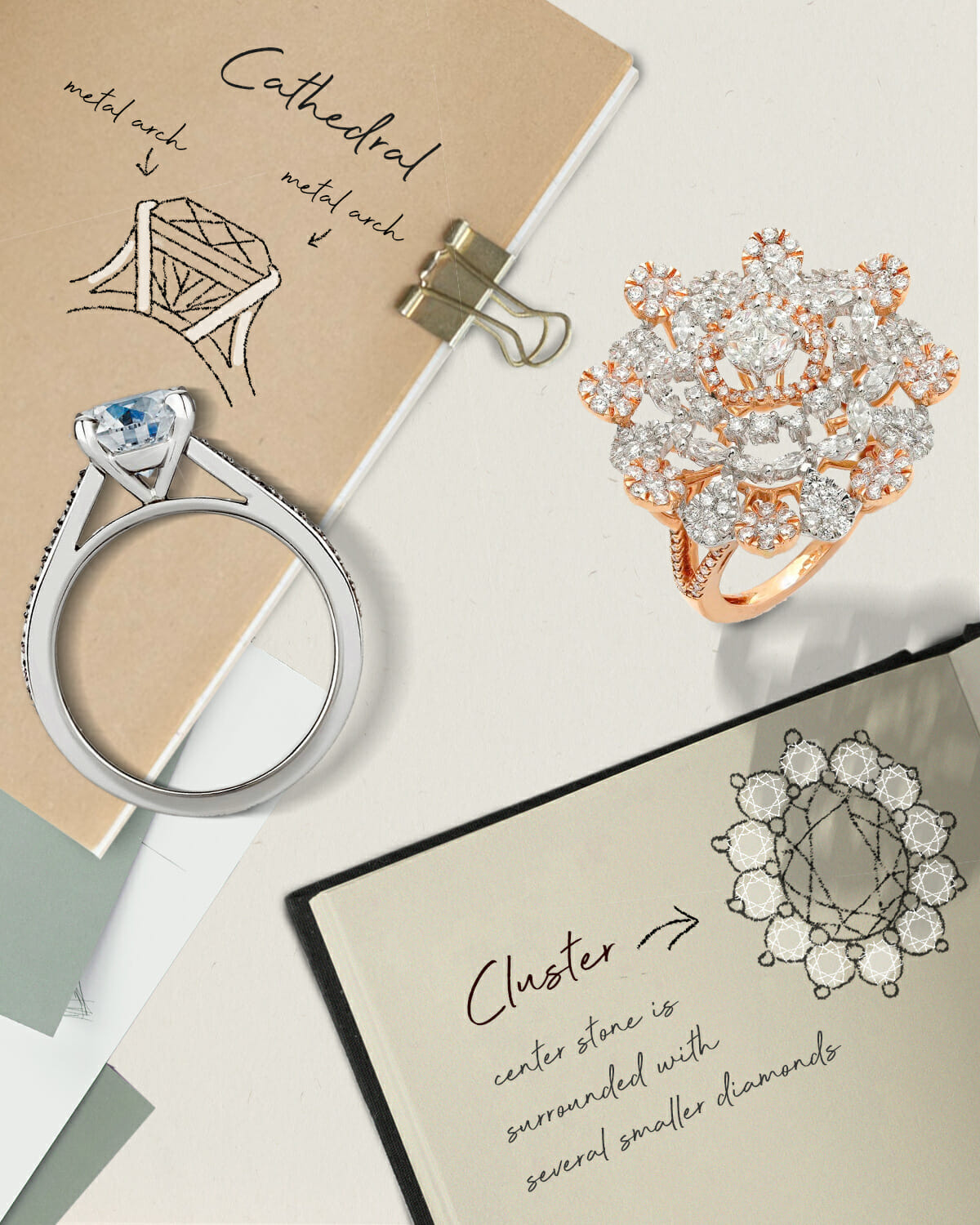 Cathedral
This setting features a center stone flanked by metal arches that mimic a cathedral building to hold it in place.

Cluster
In this setting, the center stone is surrounded with several smaller diamonds clustered together, making it appear as one large diamond.