Over the years, the delicate yet hard-to-miss beauty of the maang tikka has captured the imagination of women worldwide, both on-screen and off. Nicole Kidman wore a version in Baz Luhrmann’s decadent Moulin Rouge; Shakira has taken the focus away from her hips and onto her forehead with her version; Alicia Keys famously turned up at the American Music Awards in 2008 wearing one—a delicate here-now-gone-now diamond piece that, in hindsight, somehow brings to mind Vision from the Avengers. Iggy Azalea chose an elaborate matha patti for the video ‘Bounce’; Beyonce performed at Isha Ambani Piramal and Anand Piramal’s wedding in an uncut diamond version that was reflected in her mirror work outfit. Of course, Kim Kardashian West stirred the most debate, with her Sunday Service Vibes post, pairing the traditional Indian ornament with a minimalist Rick Owens creation. 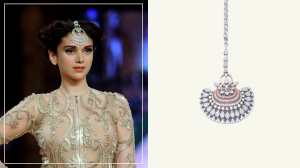 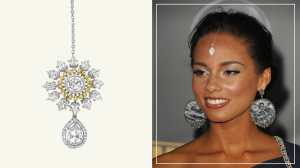 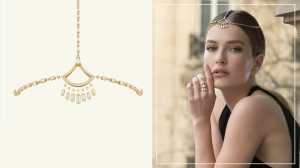 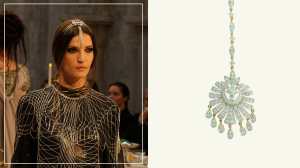 Rooted in Tradition
The traditional Indian protocol of bridal adornment, the solah shringar, is, as the name suggests, a 16-piece set that includes the maang tikka. Many of these pieces are dispensed within the modern-day wedding, while many still—like the maang tikka—are not restricted to bridal attire anymore. Thanks to its unique talent for both subtlety and opulence, the diamond maang tikka has turned into a do-much-by-doing-little accessory for those looking for tradition without the tonnage.

The versatility of a natural diamond maang tikka makes it as befitting to a couture outing in Milan as a wedding in Mumbai.

With iterations ranging from the Rajasthani borla, a tiny sphere that rests right at the hairline, to the more elaborate matha-patti, which comprises strands that run from the centre of the forehead to the back of the head, framing the face, or the jhoomar patti, the more elaborate chandelier style that rests on one side, there’s a maang tikka for everyone. The diamond maang tikka is uniquely poised in the inventory of traditional Indian adornment—not as an everyday essential as earrings, but not as confined to the realm of bridal wear as, say, the haath phool. But then, few items of clothing and adornment are restricted to their raison d’etre. 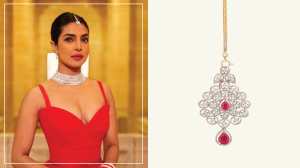 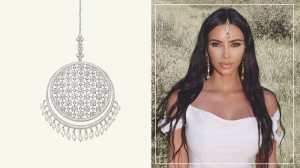 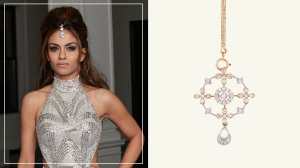 The outing that spotlighted the diamond maang tikka was in May last year. The first Monday in May is considered the most important fashion event of the year. The annual Met Gala, held in New York, sees the coming together of the world’s most influential design talent and their fashionable muses. For the fashion lover, the red carpet is where the party is at. This occasion celebrates the avant-garde and the fashion-forward.

In 2019, philanthropist Natasha Poonawalla attended on the arm of designer Peter Dundas in an exclusive shimmery metallic dress with a powder-blue bustle and trail designed by Dundas. Her standout accessory of choice—three natural diamonds linked together, nestled in her hair to mimic the maang tikka. “I have always been fascinated by the maang tikka and its many versions. For Natasha’s look, we wanted to have fun, so we combined three gigantic natural diamond solitaires for a stunning effect. There were no other accessories, and it made such a beautiful statement. It was flamboyant, stylish and our nod to India,” says stylist Anaita Shroff Adajania, who styled Poonawalla for the occasion. 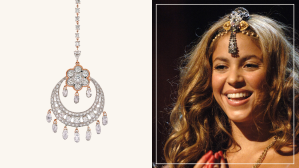 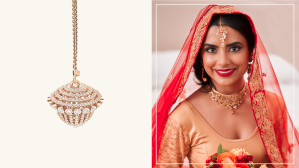 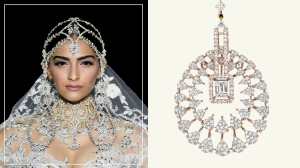 Besides its aesthetic value, however, there is also a spiritual significance attributed to the ornament. Designed to represent the third eye, it rests on one’s sixth chakra and is said to represent control over one’s thoughts. Mumbai-based luxury consultant and blogger Prerna Goel, a regular on Vogue’s best-dressed lists, is an ardent maang tikka wearer. Explaining her fascination for the ornament, Goel says, “I’m very old-school. The maang tikka is very rooted in our tradition and ethnicity.  It has a beauty and authenticity that is so endearing, whether it’s the regular maang tikka or the borla. In my opinion, no Indian outfit is complete without a maang tikka. It also has a spiritual aspect—it represents your third eye, it grounds you and aligns your chakras.” The proclivity towards things old-school means she tends to gravitate towards traditional pieces, often (but not confined to) polki diamonds but also vintage-inspired natural-diamond styles. “I like diamond pieces that come with a story,” she adds.

A Cut Above
Cecil de Santa Maria, chief operating officer of ORRA, notices a shift in preferences when it comes to the maang tikka. “While traditionally maang tikkas have been designed in 22K gold or kundan, the new-age bride prefers to adorn herself with diamond maang tikkas as they symbolise modernity and elegance,” he says. While the round brilliant-cut remains the most popular for diamond maang tikkas, motifs range from floral to paisley that complements the traditional bridal ensemble, he explains, adding, “With diamonds as the preferred choice in maang tikkas, the designs are far more elegant and dainty in comparison to the larger, more robust kundan designs.”

Siddhartha Sacheti of Jaipur Gems, on the other hand, sees the prevalence of diametrically opposite aesthetics: “There are two distinct preferences. Some prefer bold diamond pieces, while millennial brides prefer small, dainty maang tikkas—they don’t want anything too big or too loud. However, in north and west India, women prefer more opulent and bolder maang tikkas. We’ve also seen that younger brides prefer to pair their maang tikkas with maatha-pattis. While [cut] diamonds are very popular… There are some very interesting maang tikkas in diamonds.” He surmises, “Overall, what we’re seeing is that women between the ages of 25 and 30 are more experimental and like pairing their maang tikkas with their matha pattis. Those above that age bracket prefer large diamond maang tikkas with larger earrings.”Whether you opt for wearing your diamond maang tikka with a sari at a wedding or with a sculpted gown for the red carpet, let this accent be the focal point of your look. Among small things with big impact, few will match the diamond maang tikka’s shine. 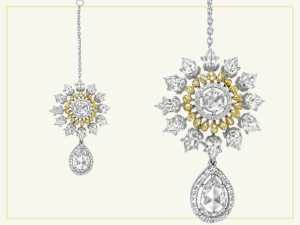 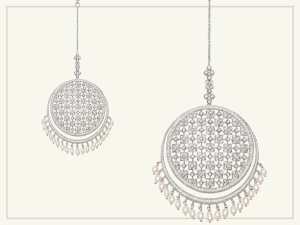 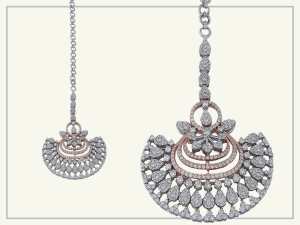 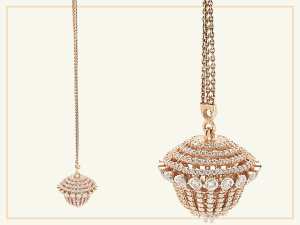 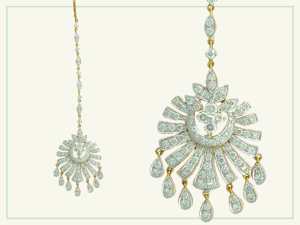 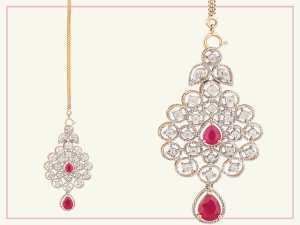 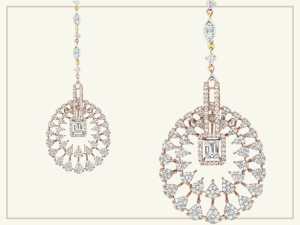 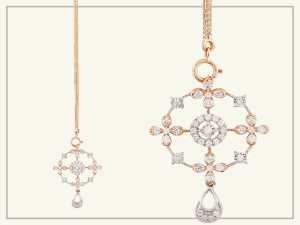