Each couple has their own intimate rituals that make up their relationship. The quiet routines that show you care for your partner even on the busiest day. From the cup of tea that they make for you in the morning to the kiss you give them when they come home from work, these intentional habits make each day a little brighter.

For many married couples, one such annual ritual is Karva Chauth, a North Indian festival which falls around the same time as Diwali and Dussera. Karva Chauth is the chance for couples to demonstrate their enduring love as well as the sacrifices they are willing to make for their relationship. Traditionally the festival is celebrated by married women who fast, abstaining from food and even water, from sunrise to sunset for the safety and security of their husbands.  The women break their fast upon sight of the moon, a romantic moment that’s been immortalised in classic Bollywood films such as Dilwale Dulhania Le Jayenge and Kabhi Khushi Kabhie Gham. To celebrate the occasion women wear their best clothes and jewellery and receive gifts from their families, making it the perfect occasion on which to gift a natural diamond. Karva Chauth is a reminder that even the strongest relationships take time, care, and sometimes even sacrifice to flourish.

The women break their fast upon sight of the moon, a romantic moment that’s been immortalised in classic Bollywood films such as Dilwale Dulhania Le Jayenge and Kabhi Khushi Kabhie Gham.

ANCIENT STORIES
Ancient stories about the origins of Karva Chauth usually illustrate the enduring, almost magical power of love. The most popular legend is of a queen named Veeravati who vowed to keep a strict fast while her husband, the king, was away at war. Unfortunately for the queen her seven brothers created a false moon using a mirror, or in some versions a bonfire, and tricked her into breaking her fast.  As soon as she did, Veeravati received a message that her husband was dead. The story continues that Veeravati was so anguished and her despair felt so painfully that the gods were compelled to bring her husband back to life on the condition that she fasted one more time.

Another similar story features the warrior king Arjuna and his wife Draupadi. While Arjuna was away in meditation, Draupadi fasted to ensure Arjuna’s quick return because she had heard a story about how the goddess Parvati once did the same thing to bring back the god Shiva from his meditative state.

A third tale features a woman named Karva who was deeply in love with her husband, that when he was attacked by a fearsome crocodile while bathing, she found the strength to capture the crocodile and even frightened the god of death Yama enough to convince him to save her husband. To celebrate her power and the force of her love in the face of unprecedented odds, we now celebrate Karva Chauth.

A NATURAL DIAMOND AS A SYMBOL OF LOVE
Along with the abstaining from food and water, there are numerous other rituals that make up Karva Chauth. It’s a day of celebration, of time spent with family and friends. This includes a puja that often takes place with other women and  the exchanging of ‘karvas’ or earthen pots filled with bangles, makeup, or jewellery. To mark the occasion many women adorn themselves in traditional symbols of matrimony—they apply mehendi, or henna, wear a bindi and add sindoor, or vermillion in their hair. Just as when they were new brides, they wear red or pink and also pull out their favourite jewellery—from diamond wedding sets to family heirlooms or mangalsutras. A mangalsutra is an auspicious necklace worn by a married woman which is usually made of black beads and gold. More contemporary versions also feature natural diamond centrepieces in an array of designs. Many women also get gifts from their families, a piece of jewellery from a mother-in-law or a token of love from their husband to mark the occasion.

Just as when they were new brides, they wear red or pink and also pull out their favourite jewellery—from diamond wedding sets to family heirlooms or mangalsutras. 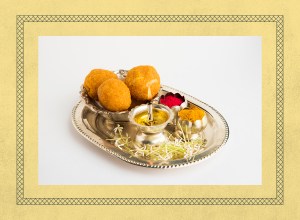 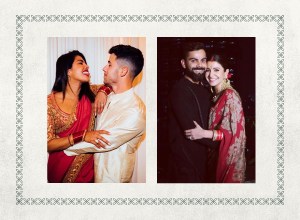 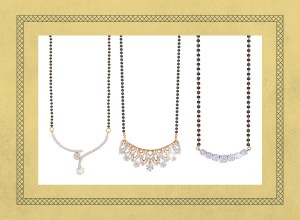 The ritual puja is an essential aspect of Karva Chauth. It includes a thali filled with offerings of sweets for the gods, symbols of marriage like sindoor, or vermillion, and a diya.

THE PAST MADE PRESENT
While Karva Chauth may have its origins in ancient religious traditions, many couples today have made the festival their own, sharing equally in the ritual. Many couples today fast together, both husband and wife  renewing their bonds. At the end of each fast, fashion and lifestyle curator Priyanka Khanna’s husband brings her a glass of diet coke or a cold coffee, a ritual the two have celebrated since 2010. “It’s a memory that I will always cherish,” says Khanna. “Both of us grew up watching our mother’s fast and so it’s equally important to us as well. I hope my kids will remember it fondly too.” Many couples also exchange gifts and since a diamond is the ultimate symbol of love, few things are as romantic as a solitaire ring or a pair of classic, natural diamond studs.

In the end, however you practise Karva Chauth the essence of the festival remains the same – to celebrate love and its ability to overcome all odds and give us strength and hope.

Did You Know There Are 8 Different Definitions of Love?

The Art of Wearing Jewellery with Aditi Rao Hydari