Long before the Met Gala was the biggest fashion party of the year lit up with dazzling diamonds or the subject of the documentary The First Monday in May or the inspiration for the jewelry heist in Ocean’s 8, it was a relatively modest fundraiser for the Costume Institute at the Metropolitan Museum of Art. The event, which launched in 1948, was the brainchild of the legendary publicist Eleanor Lambert who also conceived the International Best Dressed List and New York Fashion Week.

Back in the day, the gala was held at various restaurants in New York City. Tickets cost around $50 and attendees were a blend of society and the fashion industry. Things began to change during the 1970s when Diana Vreeland, the once legendary Vogue editor-in-chief, began her second act as a special consultant to the Costume Institute. She brought the party in-house to the museum and expanded the guest list to include the same stylish blend of actors, artists, models and designers that populated the pages of Vogue. While the celebrations were glam, there wasn’t a major red carpet and countless photographers to record every angle.

In the mid-1990s when Vogue Editor-in-Chief, Anna Wintour, became a chair of the gala she used the template Vreeland created for the party and began to elevate and expand it. Flash forward to now and the fine-tuned affair brings international recognition to the annual fashion exhibitions and has raised over $120 million for the museum. A major part of the press coverage of the Met Gala looks is the red-carpet.

“The Met stairs, the famous red carpet, has grown in spectacle over the years; it’s a kind of theater.”

—Anna Wintour discussing the Met Gala in the First Monday in May documentary.

There have been a seemingly infinite number of major diamond moments during the Wintour years at the Met. The gem has acted as a spotlight or the proverbial icing on the cake of elaborate fashions and it also happens to be the editor’s favorite stone. Well, at least that’s what her daughter Bee Carrozzini shared in a behind-the-scenes moment when she was trying on jewelry in The First Monday in May. To be exact she stated, “Mom only likes diamonds.”

Since the annual event has been postponed this year due to the coronavirus, we thought it was the perfect time to take a look back at some of the best and brightest diamond jewels in recent memory. We edited the long list down to 10 of our favorite Met Gala looks. They range from eye-catching contemporary pieces to gorgeous vintage treasures. 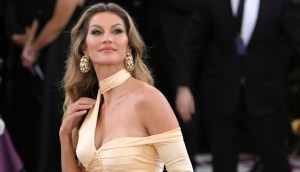 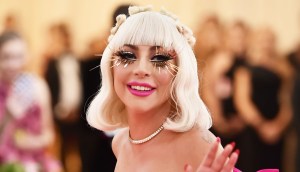 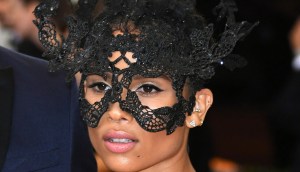 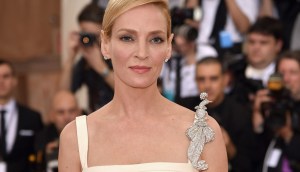 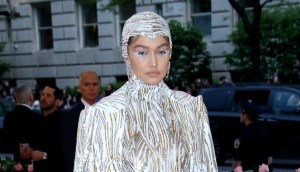 Gisele Bündchen gave serious jewelry fans a thrill at the 2018 Met Gala when she sashayed up the red carpeted stairs in a Versace gown and a ginormous pair of diamond and gold hoops by the Italian wunderkind Alessandro Sabbatini of SABBA. A sighting of the super talent’s work is practically like seeing a unicorn. He does not have a social media account and is available exclusively at FD Gallery in New York City.

For the 2019 Met Gala celebrating the Camp: Notes on Fashion, looks were more over-the-top than they have ever been in the history of the event. Queen of Camp, Lady Gaga wore four different outfits on the red carpet and one Tiffany necklace set with 28-carats of princess-cut diamonds and a gold butterfly accent from the 2019 Blue Book collection.  The singer who was a co-host of the evening explained, “As Susan Sontag suggested in her 1964 essay, camp is above all a mode of enjoyment and appreciation. I chose to wear Tiffany’s solid gold butterfly, which is dressed in radiant diamonds, as the epitome of enjoyment and appreciation above all else.”

For the 2016 Met Gala honoring the edgy Manus x Machina: Fashion in an Age of Technology exhibit, lots of attendees emphasized craftsmanship blended with 21st century style in their looks. Zoë Kravitz pulled off the cool combo with a lace face mask and mini dress by Valentino and Théa diamond earrings and the Madison diamond cuff from the French jeweler Messika. The emerald and square cut diamonds on the statement piece were set in a dynamic angular line pattern that gave the jewel a sense of movement.

An epic diamond Bird brooch made by Cartier in 1948 perched on Uma Thurman’s shoulder strap as she strolled up the Met’s red carpeted stairs in 2016. The big bird measuring almost 8-inches high and set with over 90-carats of diamonds flew in just for the occasion from the Cartier Collection in Paris. While the piece has been on view in exhibitions and published in books the occasion marked its red-carpet debut.

Designer Michael Kors said the sequined and feathered look he created for Gigi Hadid to wear to the 2019 Met Gala was a blend of iconic styles of Cher, Liberace and Daisy Buchanan. The supermodel added more shine to the clothes with Lorraine Schwartz hoops set with 90-carats of diamonds. When describing the ensemble, Hadid said she wanted to “Create a look I couldn’t wear anywhere else, from lashes to fingertips, because that is what the Met Ball is about.”