Natural diamonds exist to remind us of the miraculous force of nature. Right from their creation millions of years in the making, to their exceptional brilliance and strength, there’s no denying they’re a spectacular specimen of the natural world.

What’s often overlooked, however, is that a natural diamond’s radiance is a team effort between nature and the human hands that chisel it to put its best face forward. Of a diamond’s 4Cs, colour, carat and clarity are dependent on the earth.

But the cut—the factor most responsible for the stone’s brilliant appearance—is where human talent, training, and an eye for beauty comes in.

What nature created, only the most skilled craftsmen can improve upon.

Interestingly, the cut is the most technical and least understood of the 4Cs of a diamond. What casual diamond enthusiasts think of as the cut, is actually the shape of the stone. If you actively track celebrity engagements, you know the lingo pretty well: Hailey Bieber has a poppin’ oval, Cardi B’s is a chunk of Pear, while both Priyanka Chopra and Meghan Duchess of Sussex have three-stone rings with an elegant Cushion-cut diamond at the centre.

Technically, a diamond’s cut and shape are distinct from each other. When gemologists refer to the cut, it’s not the shape they’re talking about, but the complicated calculations a diamond cutter makes to determine how deep and wide a rough stone should be cut so it performs three important kinds of light reflection.

A natural diamond should produce white light along with the facets, a.k.a. brilliance; it must flash fire, which is the rainbow-hued dispersion of light, and create scintillation, that eye-catching play between light and dark when the stone moves.

“Among the 4Cs, cut is the only way through which the value of a diamond can be enhanced by crafting it at the correct angles, dimensions and degrees. Along with the foresight to see optimum yield from a rough diamond, the manufacturer’s precision is what creates brilliance and brings the diamond to life,” says Rajesh R. Shah, Partner, Venus Jewel, the expert diamond manufacturers based in Surat.

Of such importance is the cut, that a well-cut natural diamond of a lower clarity or colour can be made to look much more impressive, while a poorly cut specimen can cheapen even the most promising raw stone. “A well-cut stone ensures maximum lustre and brilliance…after all, diamonds are meant to shine,” says Milan Chokshi of Moksh Jewellery. “From a pricing perspective, the cut may not have as much of an impact as carat, clarity and colour. But from the perspective of visual impact, it probably trumps all the others Cs.”

Since a diamond’s cut is such a technical aspect of jewellery-buying, it can get difficult for laypeople to figure out if the sparkler they’re set to acquire has been well cut or not. That’s where a trusted jeweller or diamond trader comes in. Shailesh Sangani, MD, Priority Jewels advises clients to, “Choose a Round Brilliant cut if you want maximum sparkle, ask for a reputed lab certificate if you’re buying a round diamond above .30 cents and ensure it’s Triple X cut.” Triple X is a term used in the trade to indicate excellent cut, polish and symmetry.

To delve deeper into the world of cut and shape, explore these most-wanted natural diamond shapes and the secrets behind their cuts: 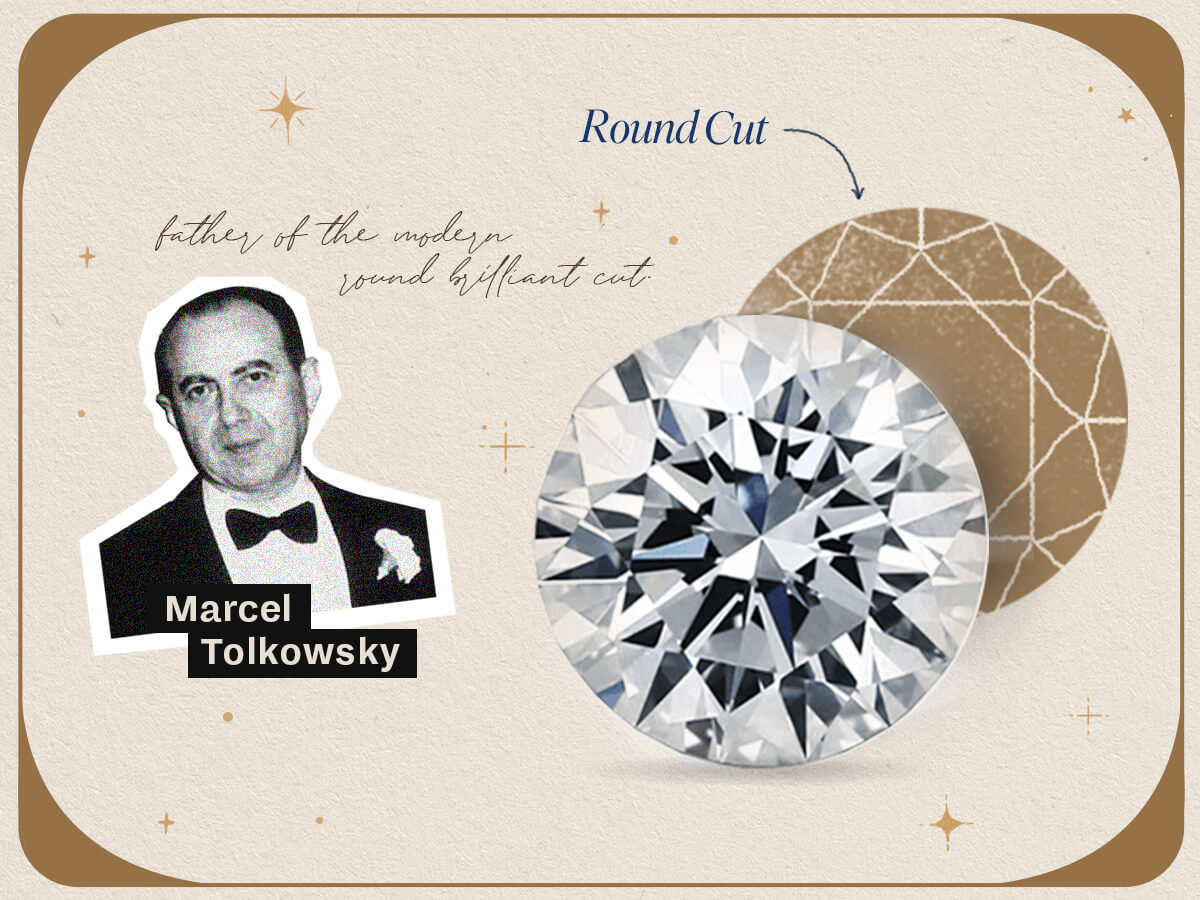 This is the most popular shape for a reason—no other cut compares to the dazzling flash of an impeccably crafted round. Belgian mathematician Marcel Tolkowsky crunched numbers to get the exact angles and determined that 58 was the optimum number of facets required to create a diamond with maximum scintillation, fire and brilliance. Today, 75% of diamonds sold are this shape.

If you’re in the market for one, the Gemological Institute of America does the homework for you by assigning a grade for the cut of each diamond, classifying them into these five categories: excellent, very good, good, fair and poor. 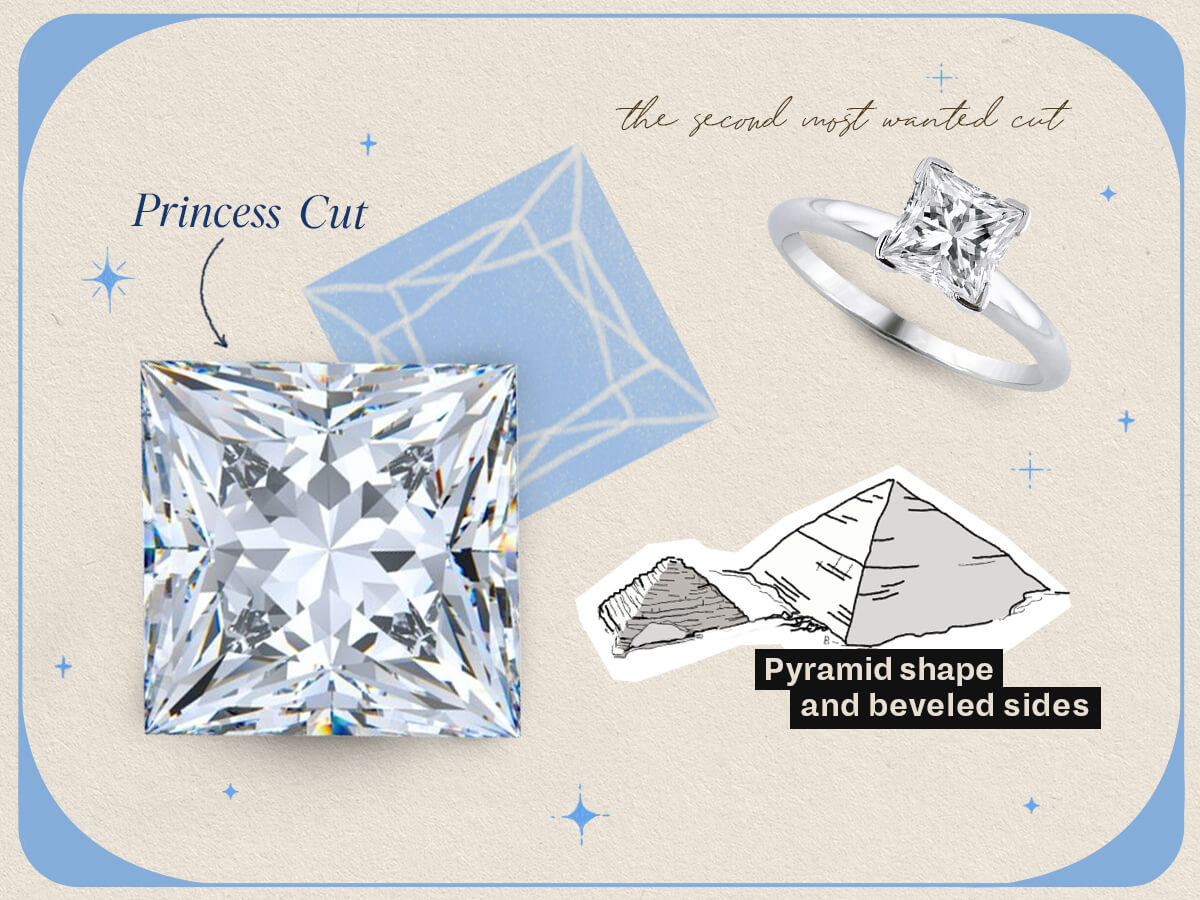 The Princess Cut offers the best of both worlds—modern lines and plenty of fire, Image source: Cut Diamond, Wikimedia Commons

The Princess cut, a.k.a. square modified brilliant in diamond-speak, is the second most-wanted cut. Its pyramid shape and bevelled sides give it incredible shine and reflection. Princess cuts are beloved because they offer the best of both worlds—they have clean and modern lines with pointed, square corners, but also the fire to rival a round brilliant. This cut uses up to 80% of the rough stone, as opposed to only 40-50% in other cuts, making it an option which packs in flash while saving cash. 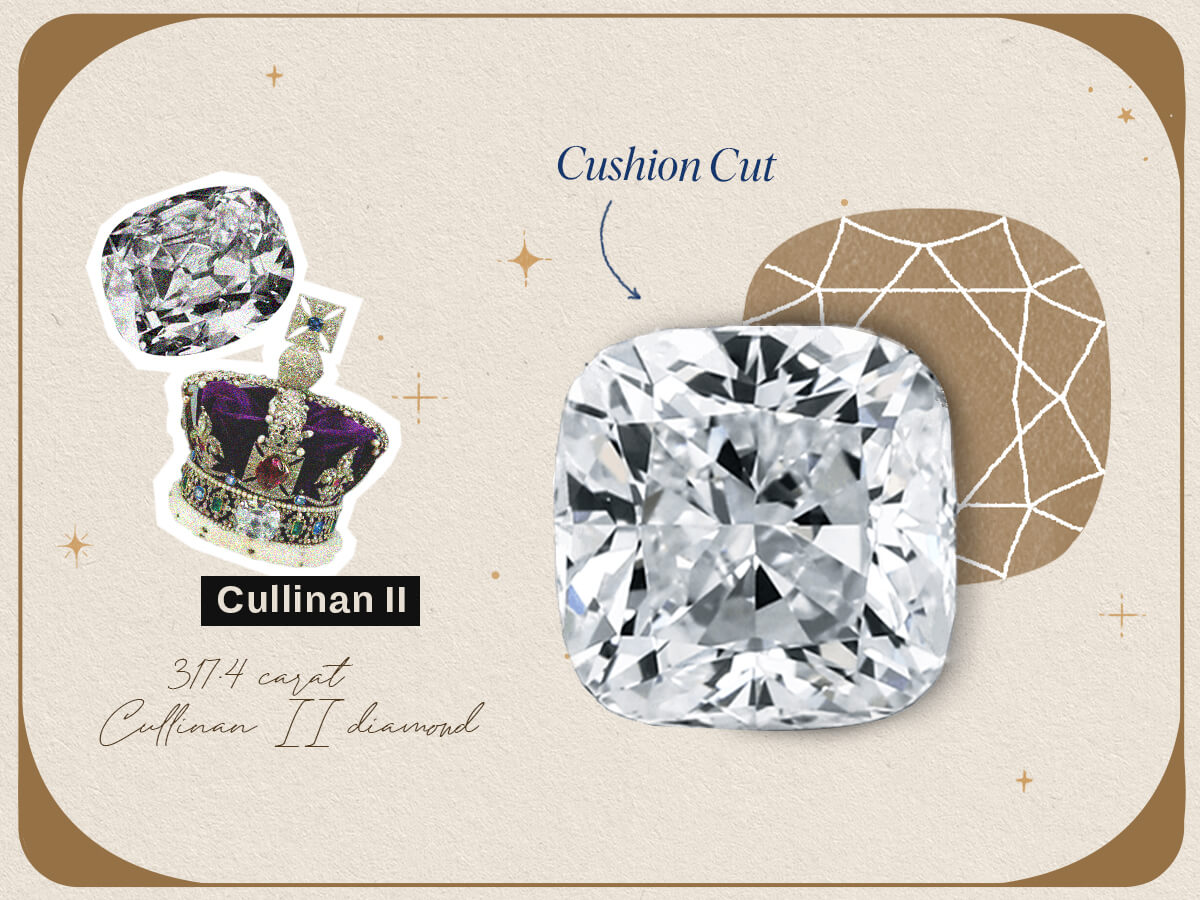 The Cushion Cut, seen across some of the world’s most famous diamonds, Image source: Wikimedia Common

Some estimate Cushions to be the third most popular shape today, but their history dates back to the 1700s when it was called the old mine cut. Cushion cut diamonds are square or rectangular with rounded corners, its facets reflecting more rainbow fire than any other cut. Some of history’s most famous diamonds have been cushions—from the Hope diamond to the Cullinan II set in the British Imperial State Crown, to the record-setting Archduke Joseph. 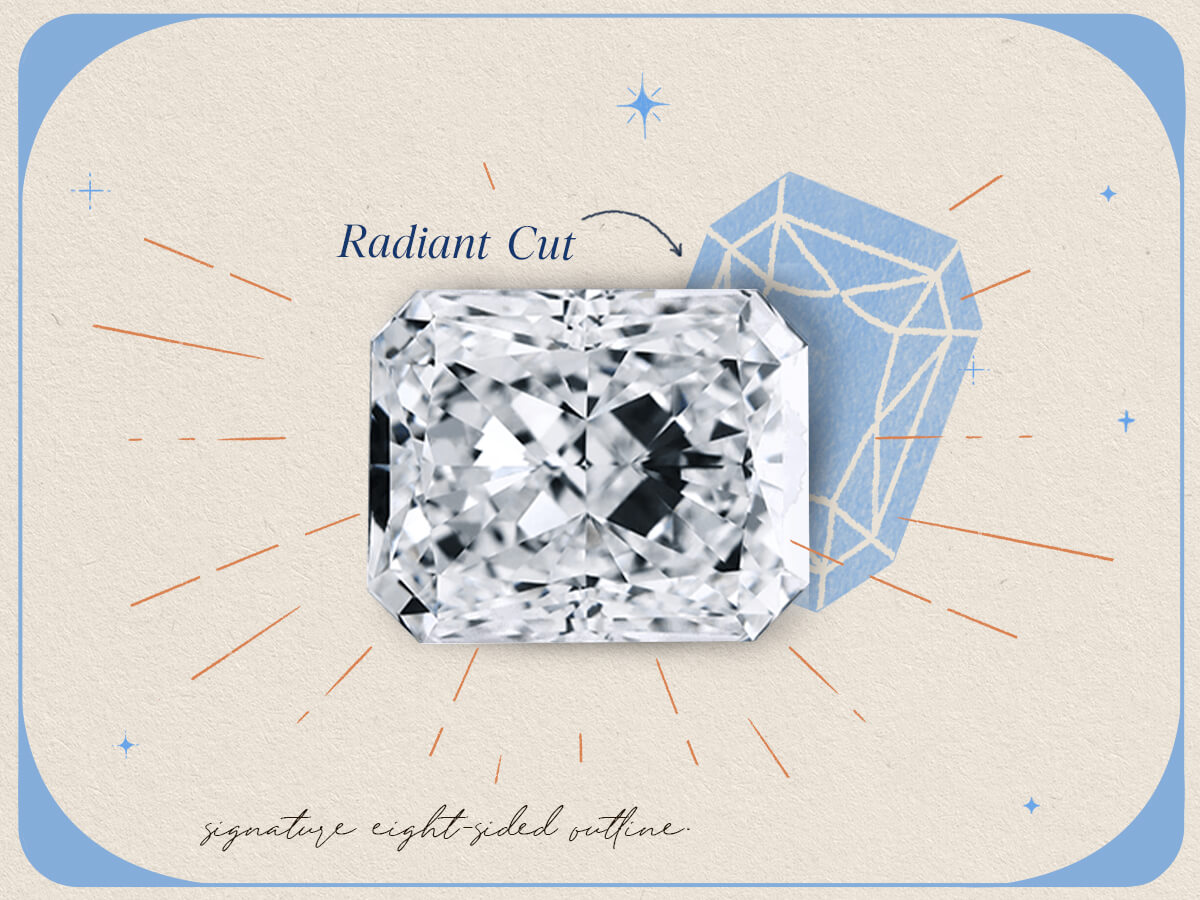 The square- or rectangular-shaped Radiant cut was created to make an elongated cut with the facet pattern of a brilliant, making them the sparkliest of all angular-cut stones. Though they’ve only been around since the 1970s, they’re super popular because of their ‘have-it-all’ properties: elegance from the step-cut silhouette, the flash of a brilliant-cut and the ability to hide inclusions while looking bigger than their carat class.

Pro tip: to tell the difference between cushions, radiants and princesses, observe the corners. A cushion has rounded corners, a princess’ are sharp 90-degree points, while a radiant’s are bevelled, giving it its signature eight-sided outline. 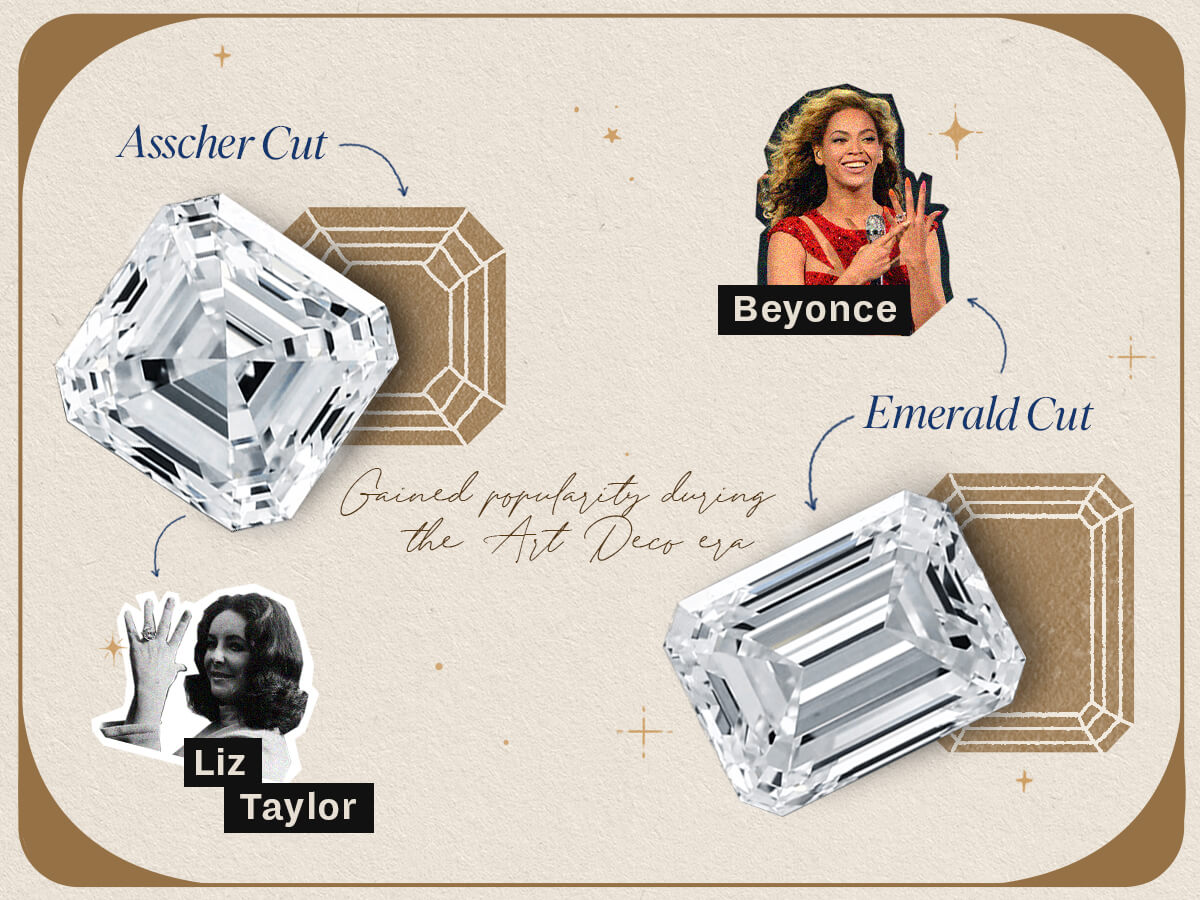 The long, step-like facets in these cuts give the viewer the illusion of being lost in a mirror maze. Their history goes back centuries—the Emerald cut is a modern cousin of the table cut from the 1400s, while the Asscher was invented in 1902. Both became ragingly popular during the Art Deco heyday of the Jazz Age, and have had loyal fans ever since. They’re expensive purchases as these cuts leave no place for imperfections to hide, making clarity paramount. Both cuts signify sophistication, signalling that the wearer doesn’t need a flashy sparkler, but an understated rock of quiet magnificence. Beyoncé, Jennifer Lopez and Amal Clooney are all on team emerald, while Elizabeth Taylor owned one of the most spectacular specimens of an Asscher cut. 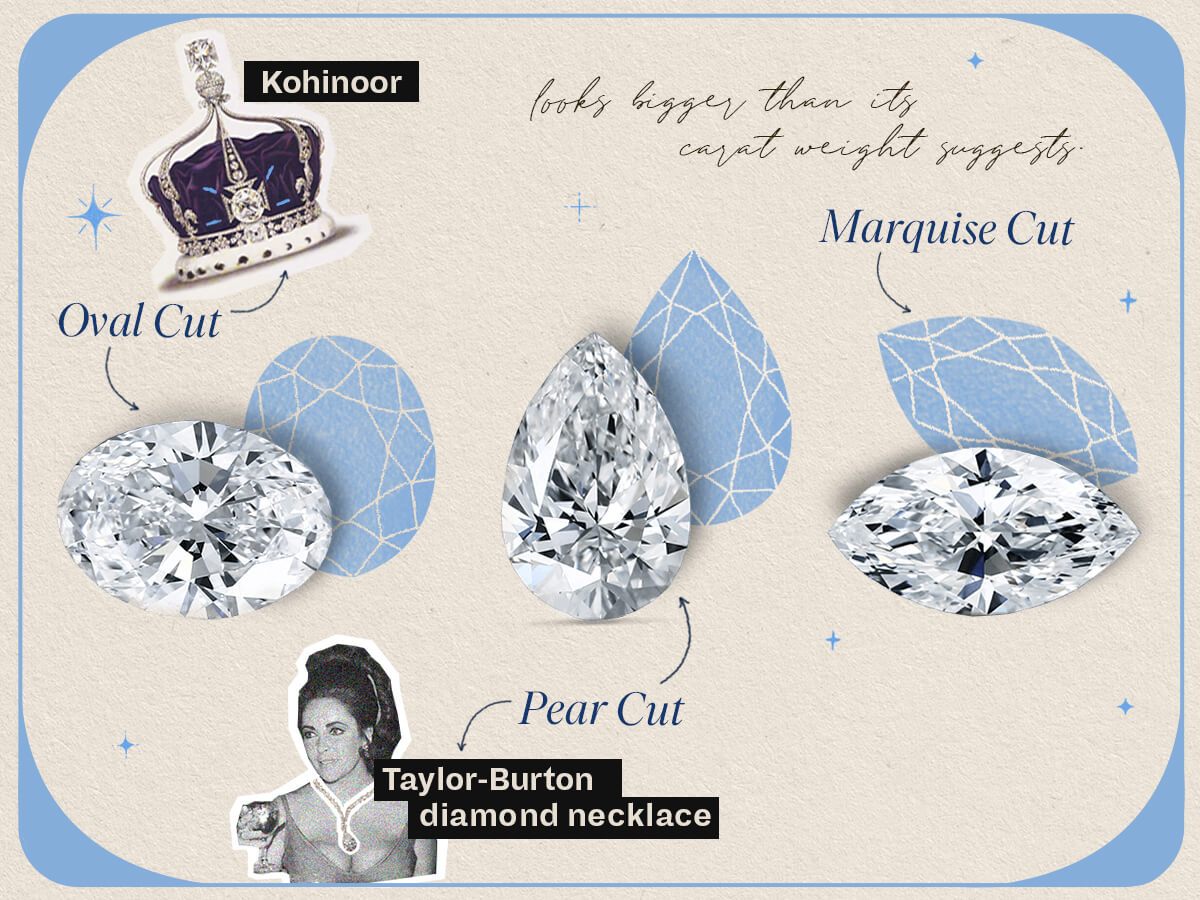 The Oval is an elegant cut which lengthens the fingers—think of it as a long, round brilliant. The elongated shape contributes to it looking bigger than its carat weight. The Koh-i-Noor, that most mystical of diamonds, is an Oval.   Pear-shaped diamonds have been around since the 1400s, created by legendary diamond cutter Lodewyk van Berquem, who invented diamond cutting as we know it today. The Taylor-Burton Diamond is the most famous example of a pear—at auction, it started a bidding war between Richard Burton, Harry Winston, the Sultan of Brunei, Aristotle Onassis, and Cartier. Cartier won, but Burton bought it off them, renaming it after his love, Elizabeth Taylor and himself.

The Marquise shape came into being because French monarch Louis XV wanted a diamond that resembled his mistress’s lips. The Marquise is an excellent choice if you’re looking for an interestingly-shaped stone that looks bigger than its carat weight suggests. For cuts with pointed edges, like Pears and Marquise cuts, the setting should be chosen with great care to ensure the sharp points don’t get damaged with regular wear and tear. These three elongated shapes are also prone to the bow-tie effect—a dark area in the centre of the stone resembling a bow-tie. Here’s where a superior cut makes a world of difference if you want a stunning specimen that spits fire and brilliance without the shadows.

When your time comes to invest in natural diamonds, doing your homework on a gem’s cut and making strategic choices will give you maximum returns and ensure you get the most fire in your ice.