Sanya Deshpande knew the diamond was coming, she just didn’t know when—or that she’d be exhausted and cranky when it arrived. On a trip to Singapore the summer of 2018, her then-boyfriend Gandharv Bedi brought her to a gin bar at sunset under the guise of meeting up with his high-school friends. “She was pretty upset.”

“The friends didn’t turn up,” Deshpande says now. “But the ring did.”

Deshpande is from Bombay and Bedi from New Delhi—they met thousands of miles away as young professionals in New York City. (Deshpande is a communications strategist, while Bedi’s in private equity.) Their courtship is “a very stereotypical New York story,” Deshpande jokes, which is her way of saying they met in person through friends but didn’t actually connect romantically until they spotted each other on a dating app.

After a year of long distance while Deshpande worked in London, they set off to look at rings. “I knew I didn’t want something too trendy. I wanted something that I would never get bored of.”

They hit up Tiffany’s and Harry Winston before finding a surprising jackpot of jewelry: Lauren B., tucked away near Grand Central Terminal. “They run a program on Sundays, like a tutorial. Over a period of 45 minutes, they hit you with every shape, size, color. ‘This is a princess-cut diamond, this is emerald-cut,’” Bedi recalls.

After trying on loads of options, Deshpande narrowed down her favorites down to two cuts—round or princess—and left it up to Bedi to surprise her. “I had a personal view of what I thought looked really good on her finger,” Bedi says. He went with the round stone. “I figured this is more of a timeless piece and a simple classic is probably best.”

“We felt that an Indian wedding in India would be an experience that we would cherish for the rest of our lives. But at the same time,” the bride says, “We didn’t want a very, very typical Indian wedding. We wanted something quite contemporary.”

They decided to modernize the celebration by shortening the guest list and the run time—just 180 guests over two days, at a destination far from either of their homes, in the lake city of Udaipur. They kept the Mehndi (henna-application ceremony), Sangeet (a wild dance party where loved ones perform), and orchestrated a Hindu ceremony with a Western-style reception.

The wedding planning was divided by skill set. “I’m very type A, very programmed. She’s very free-flowing, creative,” Bedi says. “This is going to sound crazy, but I viewed the planning of a wedding as no different than a transaction. You create a work plan. You execute against said work plan. You assign responsibilities to people, and then you follow up with them on weekly or biweekly cadence,” he says.

Bedi applied that Wall Street eye to the most serious of ventures—forcing beloved family members to learn professionally choreographed dances over the phone, including his grandparents, for the Sangeet—while Deshpande toiled with fabric vendors for her multiple saris. “The craft is dying in India, because you have a lot more machinery coming in,” she says. “I wanted something that would feel like an heirloom.”

It was the same with her array of jewels. “Similar to the way you’d source fabric in India, there’s also this whole industry where you work with certain artisans to craft pieces from the diamonds you want, or separate stones,” says Deshpande. Local jewelers created a pearl-studded, vine-inspired headband for the Mehndi, and a beaded maang tikka headpiece for the Sangeet, which was worn with a diamond necklace and earrings. On her wedding day, Deshpande’s parents gifted her a gold necklace and earrings with a design echoing her red sari, paired with gold bangles passed down from her great-grandmother.

When asked about their favorite moments from the whole marigold-accented affair, the couple actually have the same answer: the utter shock of having their friends from the U.S., Indonesia, Singapore, and England in one place, willing to sustain endless jet lag and transfers in order to celebrate with them. Says Bedi, “Seeing everyone get to the wedding after all the planning was a surreal moment. It made me feel truly loved.” 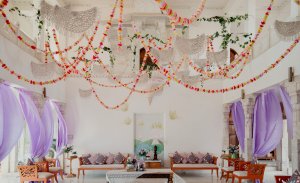 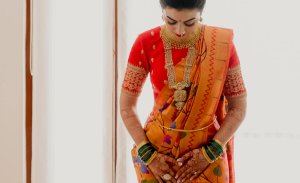