At an American Gem Society conference in April, a Colorado School of Mines geologist told the group that “everything that is not grown on Earth is mined.” The more I thought about this statement, the more I realized how true it was. The raw materials for nearly everything we use are excavated from the earth. Whether it is your cell phone, computer, the sheetrock in your house, the pipes in your walls, playground equipment, solar panels,or bicycles, every one of these items and countless others are made from materials extracted from the ground. Evidence shows humans began mining up to 40,000 years ago. So, how do we continue to live in a world where mining is essential without negatively impacting our natural environment? Diamond miners have shown it’s possible.

Canada is the world’s third-largest producer of diamonds. Most of those diamonds are found in the tundra region of the Northwest Territories, north of the 60th parallel, close to the Arctic Circle. Upon arriving here, you are struck by the vastness and beauty of the treeless landscape dotted by a seemingly infinite number of lakes. “The land of the midnight sun,” as they call it, since for several weeks in the summer season, the sun never fully sets. By contrast, if you were to see it in winter, that same landscape would be one endless sheet of ice and snow, and the sun would seldom make an appearance.

In this pristine environment, you can find Canada’s first diamond mine, Ekati, which in the local Tlicho language means “Fat Lake.” Exploration and development work began in 1981, with Ekati officially producing diamonds in 1998. The Ekati Mine and surrounding areas would be the main focus of my visit. Speaking with mine employees, government officials, locals and indigenous community leaders of the area, the common thread among them was pride. Proud that the most desirable luxury good on earth comes from their backyard and is recovered in a way that sets an example for mining industries worldwide.

Jonas Sangris, former Chief of the Dene First Nation of the area, recalls when diamonds were first discovered in the area. Sangris was Chief of the Dene people at the time of the first diamond discovery in Canada and took part in the negotiations with the government and industry to open the mines. He recalls little, if any, benefit to the area from other mining operations before this time. However, upon the discovery of diamonds, they would make sure that would change. Working together with all the stakeholders involved, they could outline plans for how the mine would operate with respect to the Dene people and environment. Canada’s diamond mines are now recognized as global leaders in sustainability, and the Mining Association of Canada’s Towards Sustainable Mining (TSM) standard is a globally recognized sustainability program that supports mining companies in managing key environmental and social risks. Before a diamond mining project can begin, an independent review board completes a comprehensive environmental assessment to mitigate environmental impacts through various tools and measures.

One of these tools is creating a Socio-Economic Agreement (SEA). SEAs set out commitments and predictions made by a company regarding their impact, the progress of which is continuously monitored and published in a yearly report to the Government of the Northwest Territories.

The pristine environment in the Northwest Territories and its preservation are a driving force for the local people in pushing for such strong environmental protection and regulations that seemed ahead of their time in the 1980s. Walking around the mining area, this beauty is everywhere. A family of wolves with three newborn cubs had settled near the location. Trying to get closer and closer, mine employees remind us that we must keep a specific distance with absolutely no interference. This point was evident later when a grizzly bear was spotted roaming an area not far from where the wolves had settled. Most people would want to do what they can to protect the newborn cubs from the exceedingly close grizzly bear. Still, just like nature photographers, even our instinct to protect isn’t allowed to compromise a zero interference policy. It was comforting to be informed weeks later that the cubs had survived the bear and were thriving.

Previously, at a mine in the area, a bird nesting on the side of a mine, and the nests’ proximity to operations, meant that mining in that area had to be halted until the bird’s nesting process was complete and the bird naturally migrated away. Even in cases like these that could cost millions of dollars, the environment comes first. In following up for more details on the bird’s nesting, a ten-page document was shared that details and documents all birds near each mine. The document is supported with photos and video monitoring to prove that operations were halted or changed in every case to avoid the disturbance of birds nesting near or in the mines. This detail made it clear that in a Canadian diamond miner’s eyes, even a common raven is put before diamonds. The attention and care given to the bird population can be seen in every animal native to the area.

Animals are far from the only environmental aspect taken into account. The land and air are equally important. While all mining requires digging, processing, moving earth and generally altering the landscape, diamond mining is set apart in how they restore the land when the mines close. Part of the agreement signed before the mines open requires money to be set aside yearly in escrow, accumulating to hundreds of millions of dollars for reclamation. This money can only be used to restore the land to its previous state after the mine closes. These closure projects can nearly eliminate the evidence mining operations in only a few years. This is already happening in diamond mines that have entered the closure process. At Ekati, the whole diamond recovery process was made clear. Kimberlite ore, the rock that diamonds are found in, is recovered from the mine and processed on-site using only water. A series of recovery techniques, from pressure to special magnets and infrared lighting (to name a few), is used to release the diamonds trapped inside. According to a 2017 study, 83% of the water used in diamond recovery is recycled. Once the diamonds are separated from kimberlite, diamonds are sold, and kimberlite is stored next to the mine, used later in the closure and reclamation process. This deceivingly simple process ensures the smallest footprint possible, yet, the mines’ environmental experts, geologists, and other scientists are continually looking for ways to improve.

The diamond mining industry’s most significant environmental footprint is carbon emissions. Still, even this is mitigated through a fuel tax and carbon tax paid to the Canadian government to help offset carbon impacts. Also, the Diavik Diamond Mine in the Northwest territories installed its wind farm, which now supplies around 10% of its energy needs. To add context to the impact, a study by TruCost in 2017 combined data from the world’s leading diamond miners and estimated that the carbon emissions of a one carat natural diamond from mine to finger have a similar carbon impact as manufacturing three iPhones. 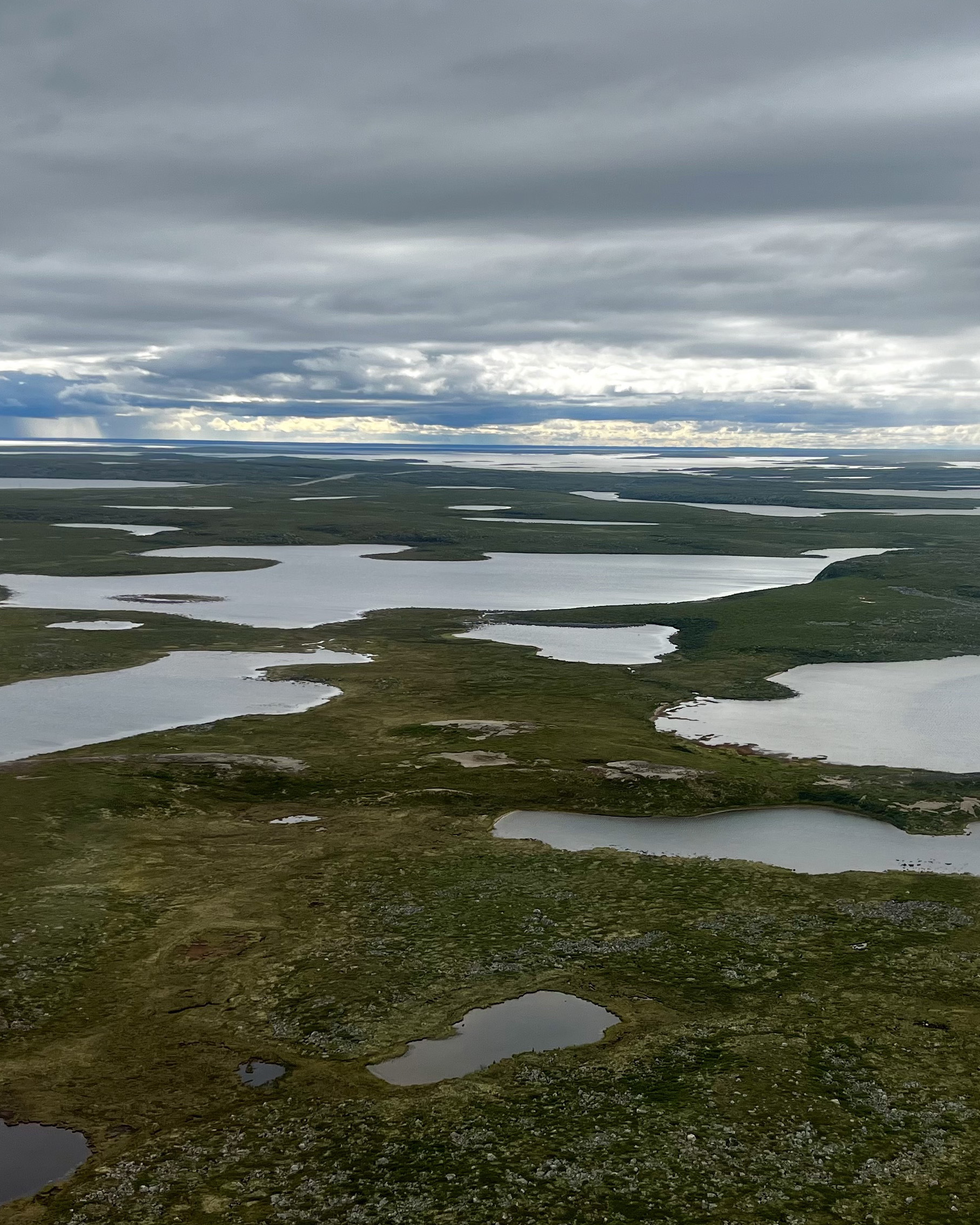 END_OF_DOCUMENT_TOKEN_TO_BE_REPLACED

A Jewelry Insider’s Journey to a Canadian Diamond Mine

Since 1996, diamond mines in the Northwest Territories of Canada have contributed over $24 billion to the economy. Nearly $17 billion went toward local businesses and $7.5 billion to Indigenous-owned local companies. Seeing the mines firsthand and speaking with the locals, you leave the Northwest Territories with a new appreciation for Canada’s diamond miners. Positively contributing to the economy with a focus on Indigenous and local people and the natural environment is undoubtedly a feat, but doing it in a way that respects, protects, and restores the environment, is what makes Canada’s diamond mining industry a leader in sustainable mining practices and an example for others to follow.