They fell in love from afar; Erika Linder and Heather Kemensky both had boyfriends when they first met, but they connected and started talking. After years of back and forth, they became each other’s first real girlfriends. Heather’s mother gave them some heirloom diamonds from Heather’s great-grandfather’s diamond mine, sparking a conversation about repurposing. Their friend Jonne Amaya, who uses repurposed stones for her jewelry pieces, created a commemorative pair of earrings symbolizing the couple’s commitment. These sun and moon earrings are a reflection of their early bonding days, when they were still long distance, using just the tools of the earth to connect.

GRACE FULLER MARROQUÍN Where are you quarantined?
HEATHER KEMESKY We were actually packing up our place in L.A., about to move, before quarantine happened. We were thinking we were on our way to New York, but instead we have been quarantined in a half-boxed-up house in L.A.!

How has life changed for you this year?
HK I was in the shower a few weeks ago thinking this is the longest time I have stayed in one place, showered in one place, and slept on the same pillow this many nights in a row! So it has changed a lot. Normally I don’t really have a routine because I am on a plane one day and going somewhere the next.
ERIKA LINDER We are so used to getting that text that says “you’re flying tomorrow,” so that has changed for me a lot.

With so much going on in the world right now, and especially in this country, how do you find daily solace?
EL To be able to be strong and to be able to love someone, you need to reconnect to connect again. We just want to be in nature right now and that is our answer. We do feel lucky to be so close to nature, but also, it doesn’t always make me feel more peaceful. These are heavy times.

How did the two of you meet?
EL We met in 2012 in L.A. We were both modeling and we each thought the other was cute. Heather had a boyfriend and I kind of did too.
HK We were both each other’s first girlfriends out-and-about and that was a big thing for me especially where I grew up in Orange County, which is super conservative (not like Sweden, where Erika is from). We then broke up for like, three years, and later reconnected doing the Louis Vuitton shows in 2015. By 2016, we were back together.

“It’s really important to me to know where jewelry is coming from, sustainability is something very important in that we can track the process of exactly where they come from and how.”

When did you fall in love?
HK I think we fell in love on Facebook before we even met. Our souls were totally connected, and we had a strong bond the second we met each other. We had an unbreakable spiritual connection before we even met in person.
EL We were immediate best friends/lovers and now we do everything together, it’s so annoying, [laughs].

Where did you shoot these photos and what was your inspiration?
EL We shot it in Malibu on the beach. I love the beach because when Heather and I first met we used to go a lot to get to know each other. For me, coming from Sweden where we don’t really have beaches, it means so much for me.
HK We didn’t want to shoot it at home, it wouldn’t have worked. So, we went really early and had a romantic day in Malibu. There are these coves and we claimed one for ourselves and no one really came upon it. A seal even came out onto the beach and hung out with us!

Tell us about the earrings? What is the story behind them?
HK The diamonds were actually family heirlooms. In the 1950s, my mom’s grandfather owned diamond, turquoise, silver and gold mines in Mexico and Canada. So, my mom gave them to me to repurpose.

What do they symbolize?
HK My friend Jonne Amaya put the diamonds into a star and a moon because when Erika and I were first talking and getting to know each other we would be in different parts of the world. We would say ‘go outside’ and if we could see the same moon and stars at the same time it connected us.

Can you tell us a bit about the buying/selection process?  Did you do it together?
HK Erika and I had talked about it for a while and then we finally designed them together. We went with Jonne because she is one of my best friends I grew up with.

Do you wear the earrings every day? If not, when?
EL I wear mine almost every day. I have mine on right now.
HK We wear them a lot, I had to take them off because I did a photo shoot the other day but they’re my favorite. I didn’t know I would love diamonds as much as I do. 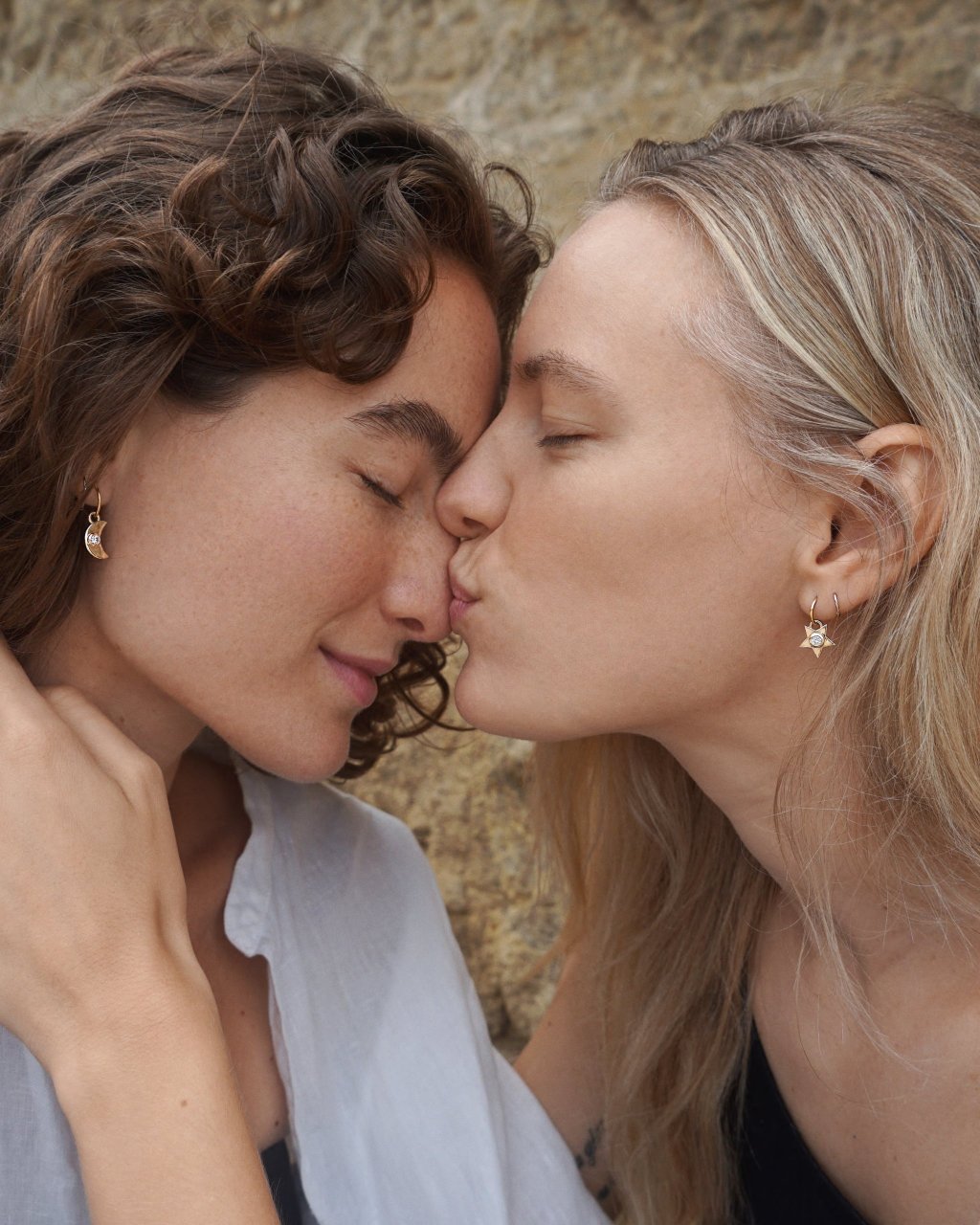 What do you think is the most important part of the diamond jewelry buying process?
HK It’s really important to me to know where jewelry is coming from, sustainability is something very important in that we can track the process of exactly where they come from and how.