At some point or another, we’ve all had diamond tiara dreams. After all, the sparkling headdress makes its wearer feel like royalty—and royalty behave as such.

Luckily, in this day and age, the diamond tiara isn’t limited to existence in one’s fantasy world. Whether you look to it as style inspo with history, a haute modern wedding accessory, or beyond, the princess-worthy topper is a true beacon of glamour.

So… how did this whole diamond tiara thing start anyway?

The etymology of the word “tiara” is derived from Greek, meaning “an ancient headdress worn by Persian kings.” Originally a symbol of status and power for royals and aristocrats, the tiara turned into a trendy high society accoutrement by the turn of the 20th century. Fun fact: as regal as they appear, tiaras are never considered crowns because they do not fully encircle the head.

Now it’s basically impossible to talk about diamond tiaras without talking about the legendary French jewelry house, Chaumet, which is so synonymous with the headdress that its logo is none other than a picture of one. Since 1780 when the brand was dubbed Nitot & Fils, Chaumet has produced over 2000 (!!!) styles, each more breathtaking than the next.

Look closely, and you’ll notice certain recurrent themes throughout the centuries of Chaumet. The first is the brand’s larger-than-life first patron, Napoleon I, and his adoration for his beloved first wife, Josephine de Beauharnais; Even Chaumet’s latest high jewelry collection, Les Ciels de Chaumet and the Étoiles, Étoiles Tiara is designed with swirls of shooting diamond stars, alluding to Napoleon’s affectionate name for the one he believed was his lucky charm—his lucky star—”mon étoile.” 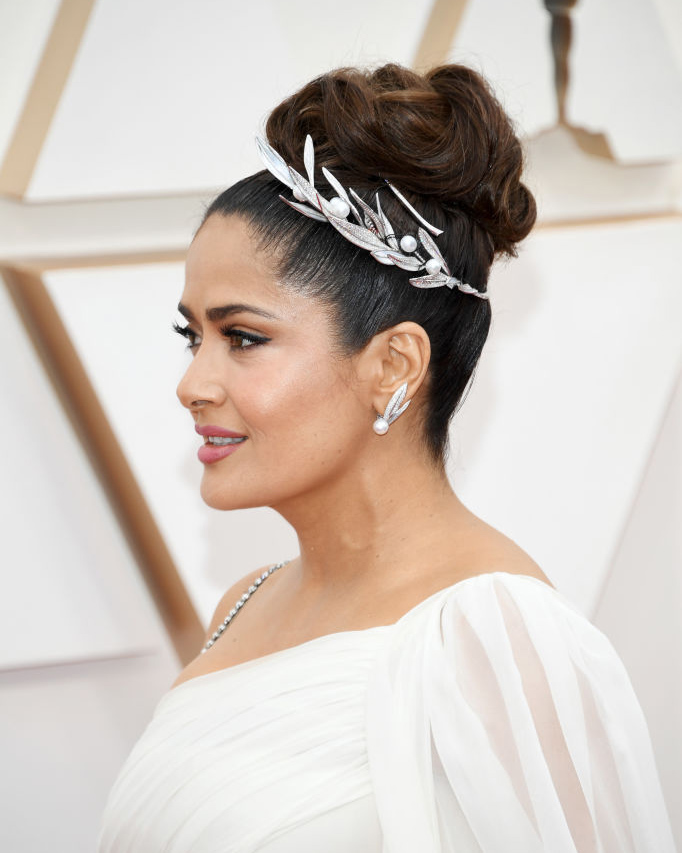 END_OF_DOCUMENT_TOKEN_TO_BE_REPLACED

Let’s get down to the style breakdown.

Perhaps the most “wearable” tiara style, the bandeau is reminiscent of the headbands we all have at least one of at home. That being said, ours are probably nothing like the 2019 Déesse d’Eternité Tiara and its 1,840 brilliant-cut diamonds woven into a braid motif.

French for a “white egret feather,” the “aigrette” tiara name goes back to the roaring twenties, when the craze was to wear a central feather on the forehead and dance the Charleston. Here, though, high jewelry replaces the bird’s plumage.

Chaumet’s Josephine Aigrette Imperial Tiara is a stunning contemporary example of this. Light and elevated, it features a 3-carat pear-shaped diamond surrounded by sparkling diamond droplets in an airy diamond setting.

Even more spectacular is Chaumet’s Soleil Glorieux Tiara. Composed of cabochon-cut rock crystals and white and yellow brilliant-cut diamonds, it boasts a 2.51-carat cushion fancy yellow diamond in the center that symbolizes the sun, with diamond rays levitating around it. This is the kind of luminance for which Chaumet is renowned.

Unlike the aigrette, the diadem—a word that also finds its origins in Greek, meaning “bind around”—sets its diamond decor all around the headdress. (This style is most commonly associated with the mention of “tiara.”)

At Chaumet, several heritage tiaras are called diadems, including the 1810 Ears of Wheat Tiara, a true icon for its technical prowess and reflection of the modern concept of modularity; each ear of wheat can be detached and pinned in a woman’s hair or on her clothes.

Another one, the 1919 Fuchsias Tiara, also known as the Bourbon-Parma Tiara, was created for a high-profile aristocratic wedding. While it took almost ten months from its commission to deliver, the piece, featuring open corollas and nine pear diamonds suspended in space, exists as a true landmark in the Chaumet legacy, and even served to foreshadow Art Deco style.

It’s worth noting that while commissioning a tiara sounds like a splendid idea, even in this modern age it still definitely takes time. Just years ago, in 2017, the Chaumet workshop worked 1,800 hours on its Lumières Célestes Tiara, which, aside from white and yellow diamonds, features 23 round cultured pearls. The technical complexity of the piece, by way of its convoluted design, required the use of three different types of settings (“clos,” “grain-filet,” “descendu”).

“Of all jewels, tiaras have the most defining impact on a woman’s appearance.”

That said, today’s weddings are the perfect opportunity to try on a diamond headdress for size. After all, as far as wedding accessories go, it doesn’t get more glamorous than the tiara. Talk about making an entrance…

Perhaps your family has an heirloom that can be worn in tradition. Or you’re lucky enough to have a relationship with a high-profile jeweler that will lend you one. Either way, in the era of female empowerment, a diamond tiara is a potent ego booster. As jewelry specialist Jessica Elliott puts it: “Wearing tiaras today is not a question of rank, but a matter of judging whether it is appropriate for the occasion.”

“Of all jewels, [tiaras] have the most defining impact on a woman’s appearance.” writes Clare Phillips, a curator at the Victoria and Albert Museum, in the coffee-table book she co-authored, Chaumet Tiaras: Divine Jewels (Thames & Hudson, 2020).

However, famed French hair designer John Nollet advises any tiara wearer obtain tips from a professional before attempting to secure it herself; knowing the headdress will stay in place allows one to wear it boldly. “To wear a tiara, you have to walk in as if you were not wearing one,” says Nollet. Noble examples are Her Royal Highness, The Duchess of Cambridge who wears hers on loose hair, or Cersei Lannister, Queen of the Seven Kingdoms, who looks so sharp with her short blond hair in Game of Thrones.

The effortless look is what makes tiaras wearable today. The right amount of mess in the hair is necessary, as well as a dose of understated provocation. If you should ever have one on your head, look fresh, chin up. Wear it, and never let it wear you.