The history of diamond engagement rings, which dates back to the Renaissance and evolves at an elegant pace, reveals the inflection points of the romantic jewel. While the rate of change in engagement rings has sped up in recent years, natural diamonds have constantly remained the most popular choice. Read on to find out all about it. 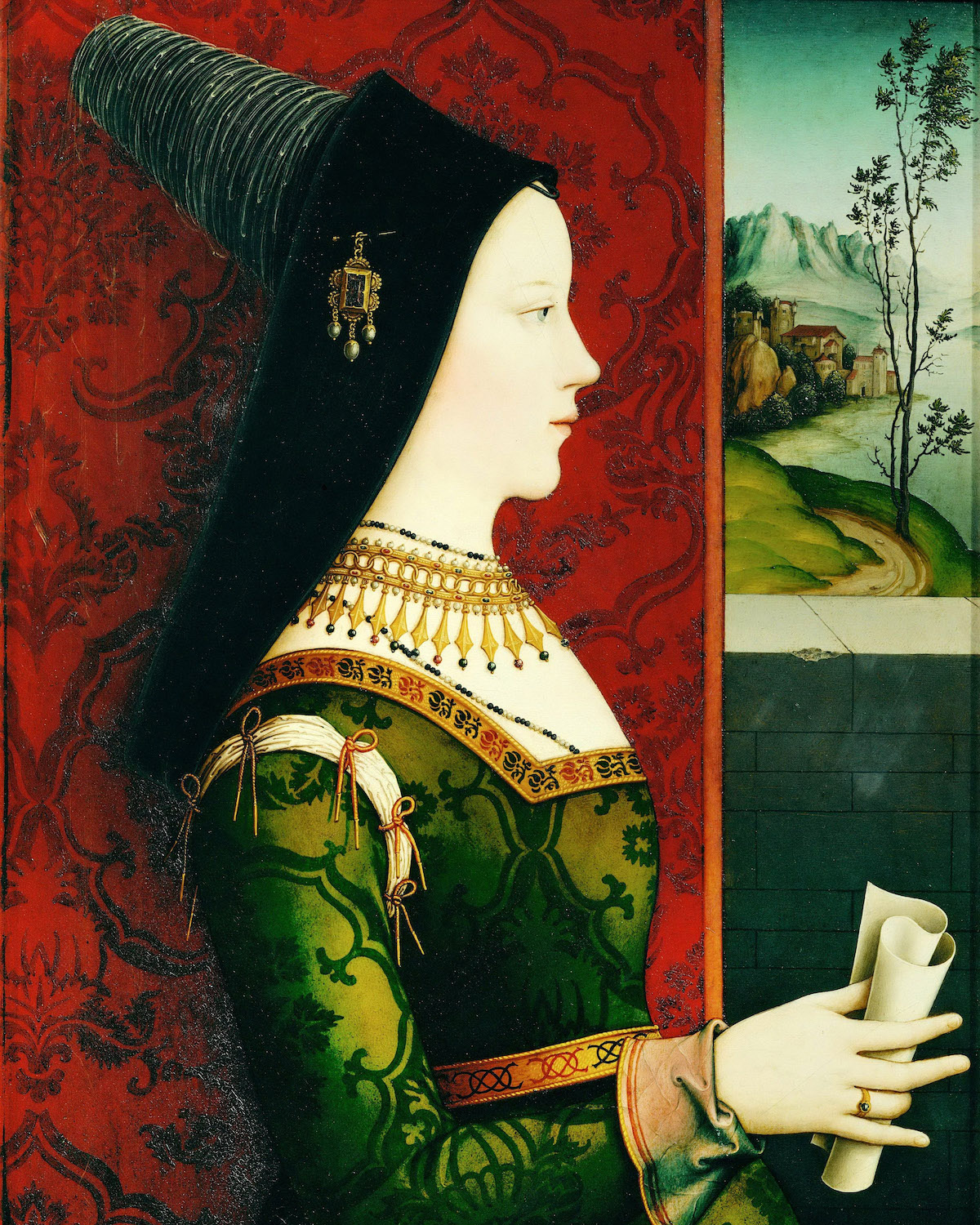 Mary of Burgundy wearing what many believe is her diamond engagement ring in a portrait by Niklas Reiser.

Many believe the first diamond engagement ring was given to Mary of Burgundy by the Archduke Maximilian of Austria in 1477. A letter written to Maximilian before he proposed read, “At the betrothal, your Grace must have a ring set with a diamond and also a gold ring.”

Like all precious stones at the time there was symbolism behind the gem. Diamonds sparkled with the purity of fidelity or faithfulness and durability. Lapidaries did not have the tools to cut a diamond. Jewelers mounted them in their natural octahedral form, which looks like two pyramids joined at the base.

A Niklas Reiser painting of Mary from the Renaissance era showing her wearing a solitaire on her right hand, is often used to illustrate the point of her engagement ring. Though it is not known with absolute certainty if the ring in the painting is her engagement ring, it could have been. During the time engagement rings were often worn on the second or the third finger of the right hand, because people believe that one or both of these fingers had veins connected to the heart. 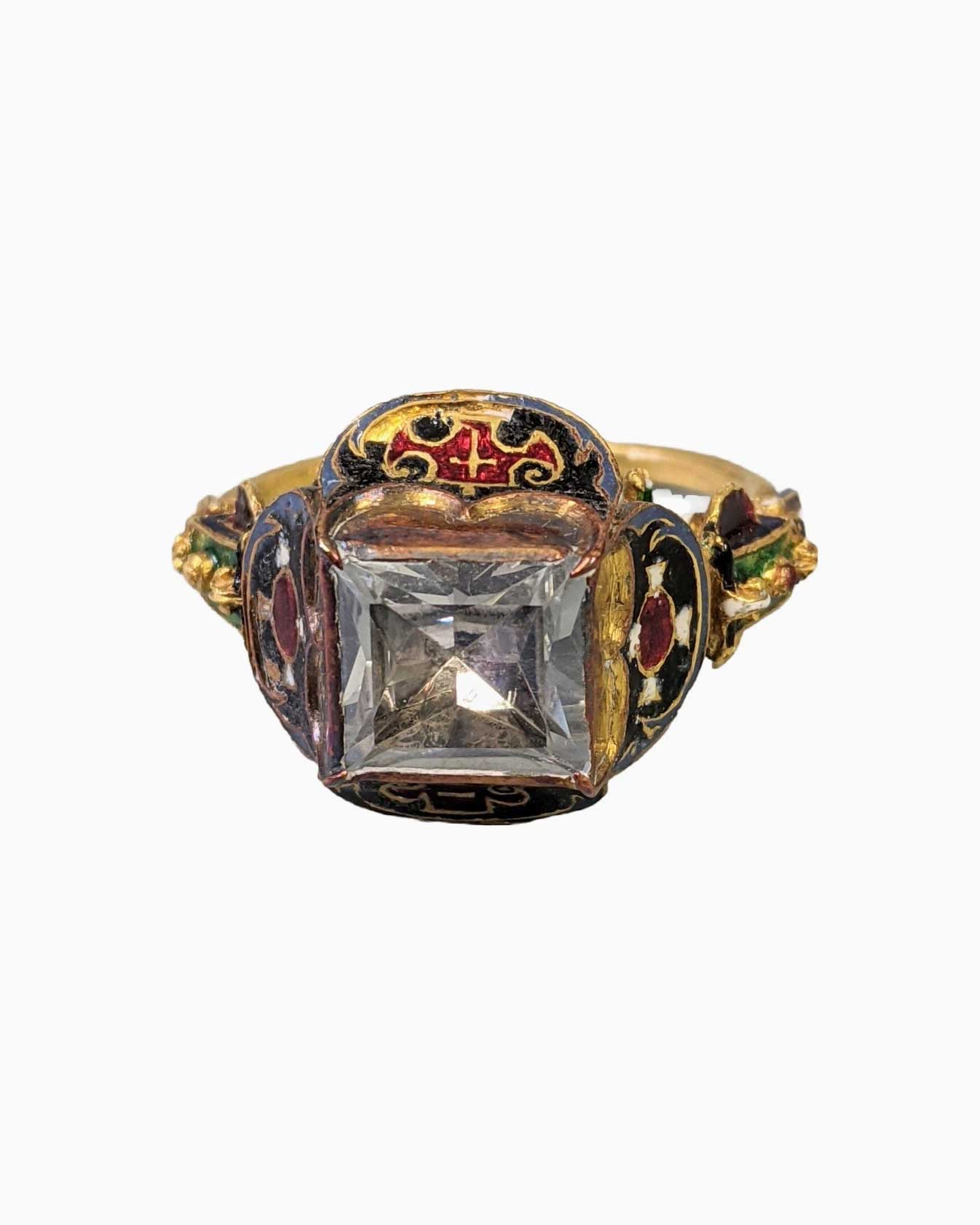 A diamond, gold and enamel Renaissance Revival Ring made during the 19th century.

Diamond engagement rings were trendier than you might think from the 15th through the 19th centuries. Rings reflected prevailing jewelry styles as opposed to being made in a classical mode.

During the Renaissance, for example, diamond engagement rings often displayed the same kind of decorative enamel found on all kinds of jewelry during the era. They usually centered on a table cut or flat diamond. The look came back as part of the 19th century Renaissance revival and was worn by brides with a passion for the period. 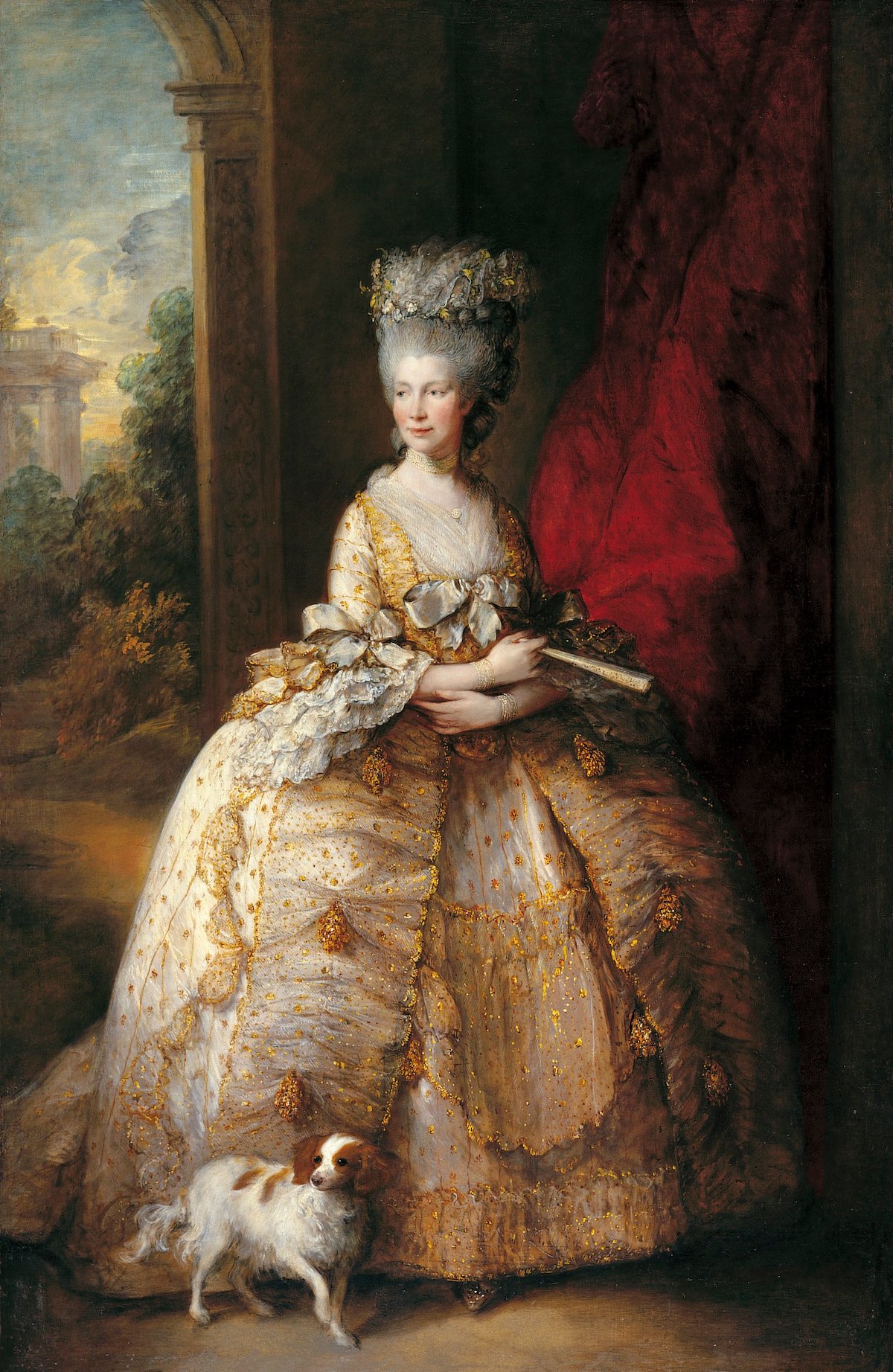 In the extravagant courts of 18th century Europe, Queen Charlotte—wife of George III of England who was friends with Marie Antoinette and nicknamed the Queen of Diamonds—doubled down on the fashion for diamond engagement rings.

The stylish royal decided to literally outshine everyone and wear a diamond wedding band with her delicate diamond engagement ring. Bigtime solitaires hadn’t taken hold in the category yet.

In 1839 when Prince Albert presented a gold and gem-set snake engagement ring to Britain’s young Queen Victoria, it sent a message to the world that the creature was a symbol of everlasting love.

Her ring sparked a passion for snake jewelry including gold and diamond snake engagement rings. 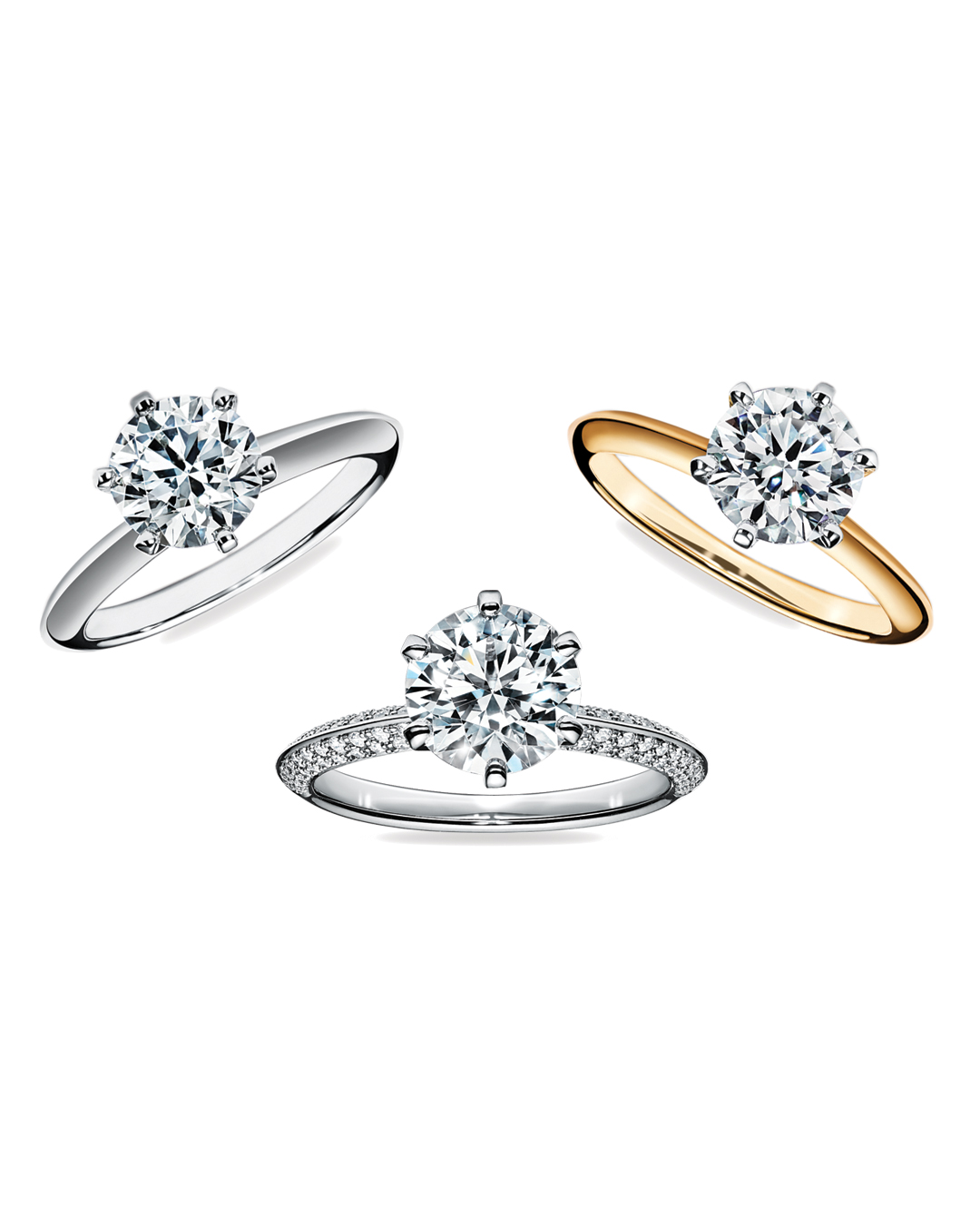 The Tiffany Setting That Changed Everything

Tiffany Setting engagement rings with a variety of mountings including rose and yellow gold, platinum and diamonds.

Founder Charles Lewis Tiffany conceived the Setting to glorify a single diamond as a symbol of everlasting love. The design had prongs lifting a diamond above a slender gold band. Light passed between the ring prongs and through the diamond, heightening its brilliance.

The deceptively simple style set the stage for the gem to shine as the star and established the new mode for modern engagement rings that dominated the 20th century and continues to be popular to this day.

First Lady Eleanor Roosevelt was one of the first high profile women to wear a Tiffany Setting engagement ring. She received the jewel centering on a 3.4-carat diamond from Franklin Roosevelt in 1904 and shortly after wrote him a note saying, “You could not have found a ring I would have liked better.” 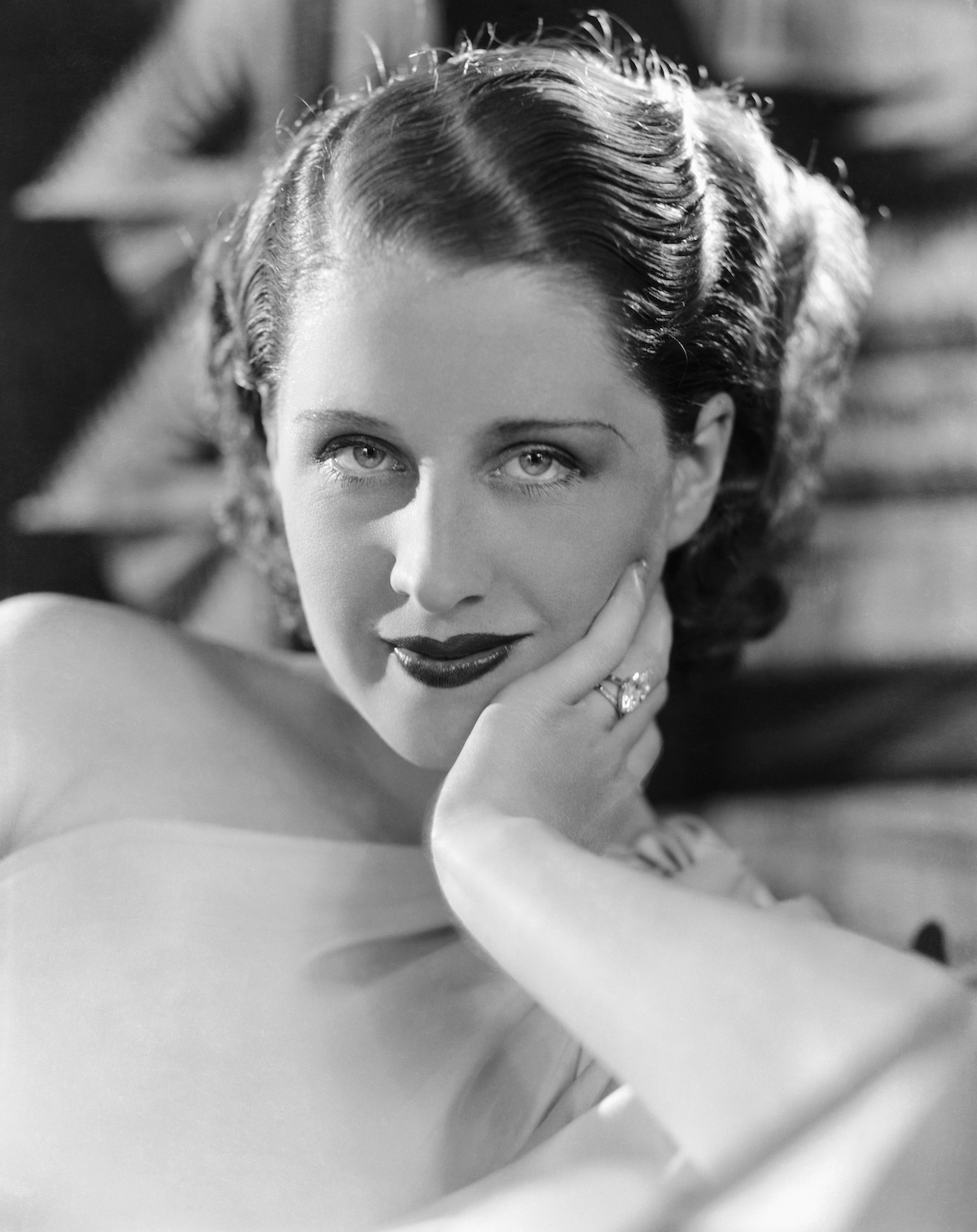 Actress Norma Shearer wearing her marquise-cut diamond engagement ring in a publicity still from around 1930.

One of the most well-known fancy-cut diamond engagement rings of the period belonged to the Hollywood movie star Norma Shearer. In 1927 when the young producer Irving Thalberg, known as “The Boy Wonder of MGM” proposed to Shearer in his office, he showed her a tray full of engagement rings and told her to pick one. The actress chose a large marquise shape diamond set on a slender platinum band. After she received the ring, Shearer wore it in all her movies where she played a married woman. 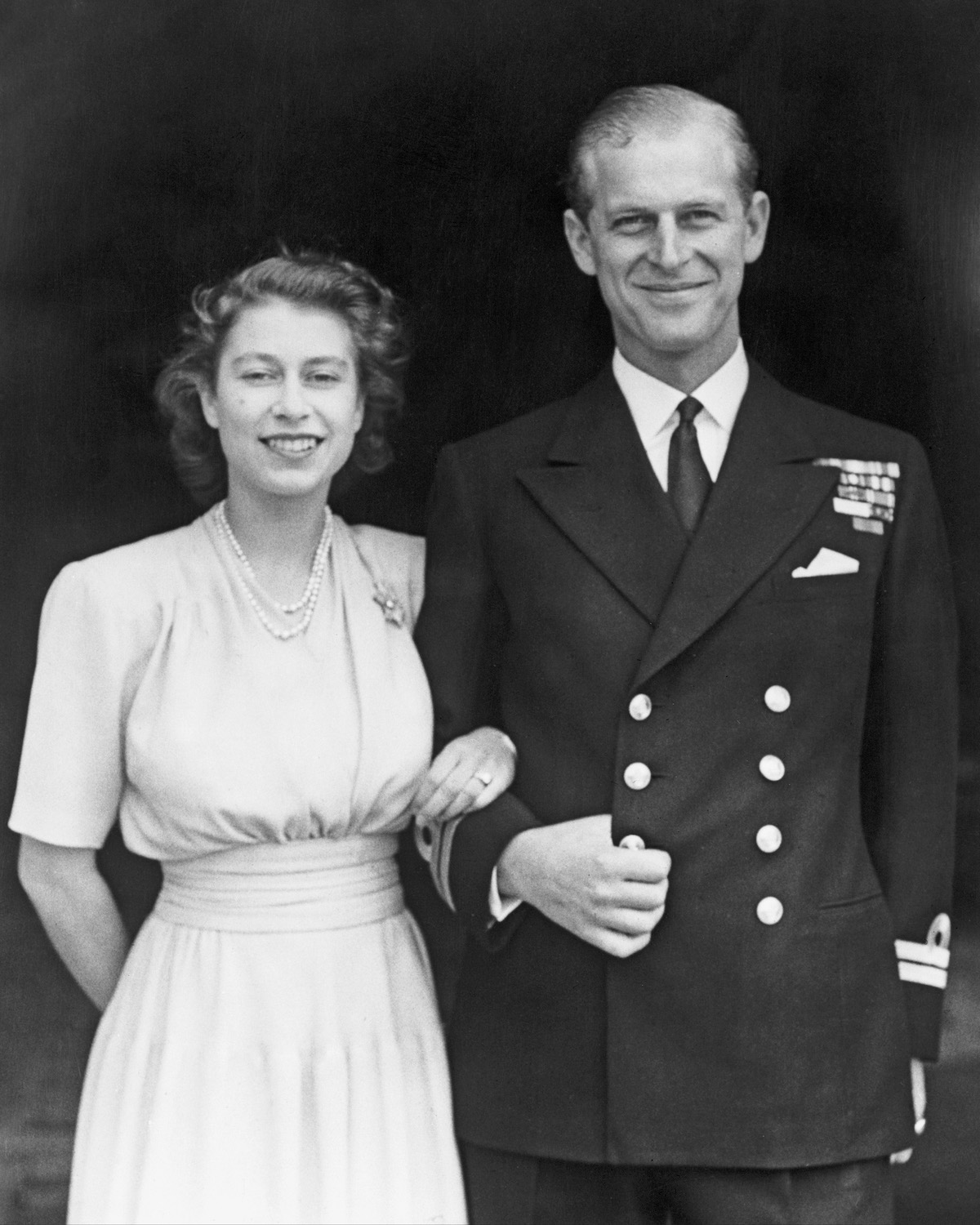 In 1947, a few years before she became Queen, Princess Elizabeth and Prince Philip posed together at Buckingham Palace after they announced their engagement.

There are some who believe diamond engagement rings only came into vogue during the mid-20th century. The theory, which we have clearly proven wrong, is based on the success of the “A Diamond Is Forever” ad campaign conceived by N.W. Ayer copywriter Frances Gerety in 1948.

While the line has become legendary and certainly helped encourage couples to choose a diamond at the time, there were other factors that added to the mid-century enthusiasm for the gem.

In 1947 a few years before she became Britain’s Queen, Princess Elizabeth announced her engagement to Prince Philip and showed the press and public her engagement ring with a 3-carat round diamond center stone flanked by smaller diamonds set in platinum.

The glamour of the fairy tale royal romance and the fascination with every detail of it was another source of inspiration for couples to get diamond engagement rings during the post war marriage boom. 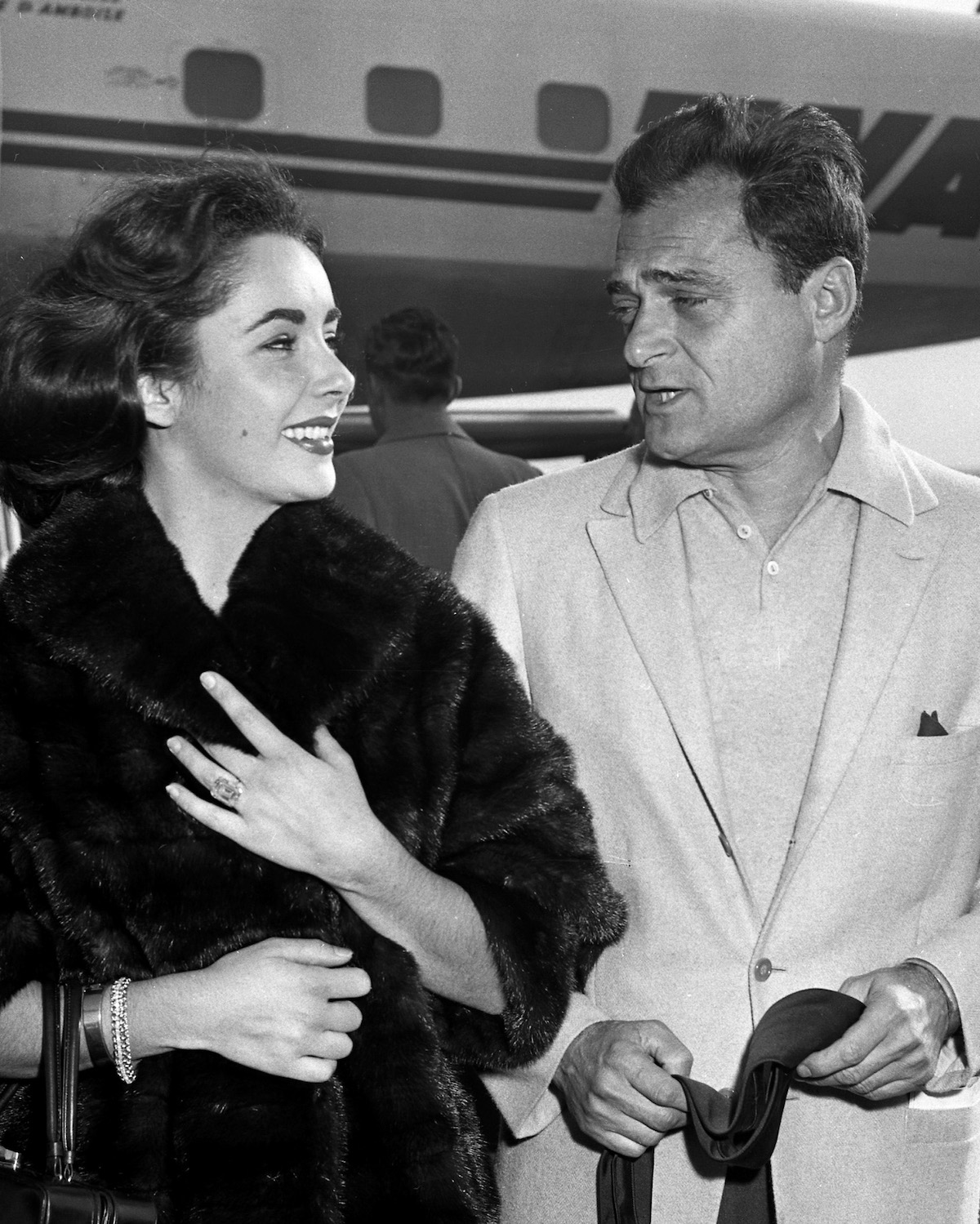 Mike Todd with Elizabeth Taylor who is wearing her 29.4-carat diamond engagement ring in September 1956.

A few years after Marilyn Monroe sang “Diamonds Are A Girl’s Best Friend” in the 1953 classic film Gentlemen Prefer Blondes two iconic movie stars seem to be embodying the statement with their ginormous emerald cut diamond engagement rings that raised the bar and set the standard for Hollywood glamour.

Elizabeth Taylor received a 29.4-carat emerald-cut diamond engagement ring from film producer Michael Todd at the end of 1956. When asked about it by the press, Todd joked that “it was not quite 30 but twenty-nine-and-a-half carats.” Taylor referred to her big diamond as “My ice-skating rink.”

Prince Rainier of Monaco gave Kelly a Cartier ring with a 10.48-carat-emerald cut diamond flanked by two baguettes. The jewel received international attention because Kelly was going to be leaving Hollywood to become royalty when she married the prince. Before she left, she wore the ring in her final film High Society (1956).

Grace Kelly’s ring is given a Technicolor close-up when her ex-husband in the film, played by Bing Crosby, remarks to her new fiancé, “Some stone George. Did you mine it yourself?” At one point in the production, Kelly rather hilariously polishes the ring on her dress and admires it. 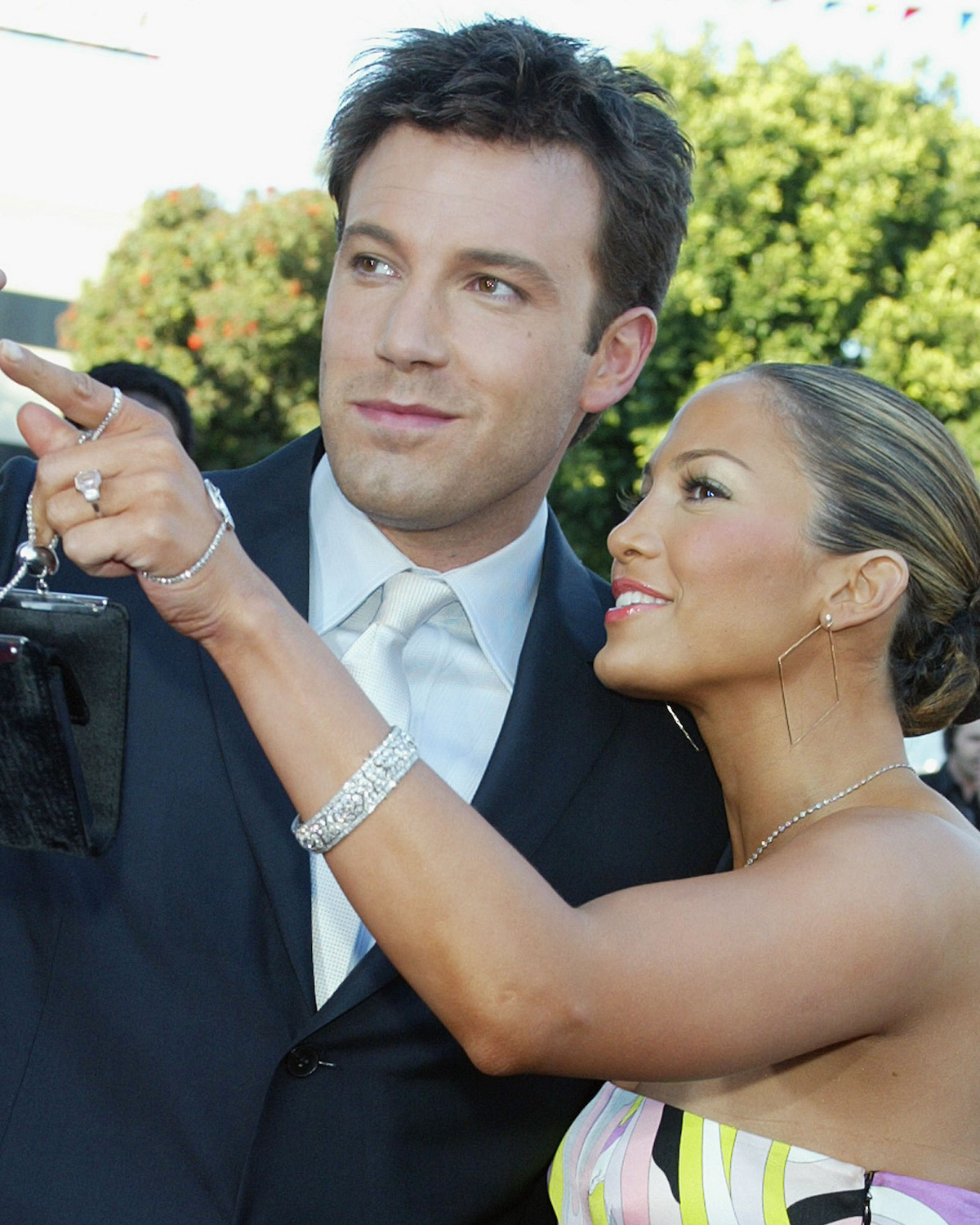 At the 2003 premiere of “Daredevil,” Ben Affleck waves to the crowd with Jennifer Lopez who is wearing her pink diamond engagement ring.

In 2002, shortly after Jennifer Lopez released her “Jenny from the Block” video which has been called a Y2K mood board and features Ben Affleck, the actor proposed with a 6.1-carat radiant-cut fancy intense pink diamond with two trapezoid white diamond side stones mounted in platinum and pink gold from Harry Winston.

J.Lo announced the couple’s engagement during an ABC Primetime: Special Edition interview with Diane Sawyer on November 13, 2002. “Bennifer” famously the called it quits before getting married, but the pink diamond engagement ring still launched a new found love for the fancy-colored diamond.

In 2004, Heidi Klum and Seal did for yellow diamonds what Ben and Jen did for pinks. The singer made his proposal to the super model a dramatic event that was extensively covered by the press after the fact. It began with a helicopter ride to an igloo built near a mountain top of a Canadian resort.

Once the couple landed, Seal popped the question with a 10-carat oval shaped yellow diamond set on a slender pavé-set yellow diamond band. The jewel was designed by Lorraine Schwartz who became the go-to engagement ring source for so many stars after creating Heidi’s ring including Beyoncé and Jay-Z and Kim Kardashian and Ye (aka Kanye West). 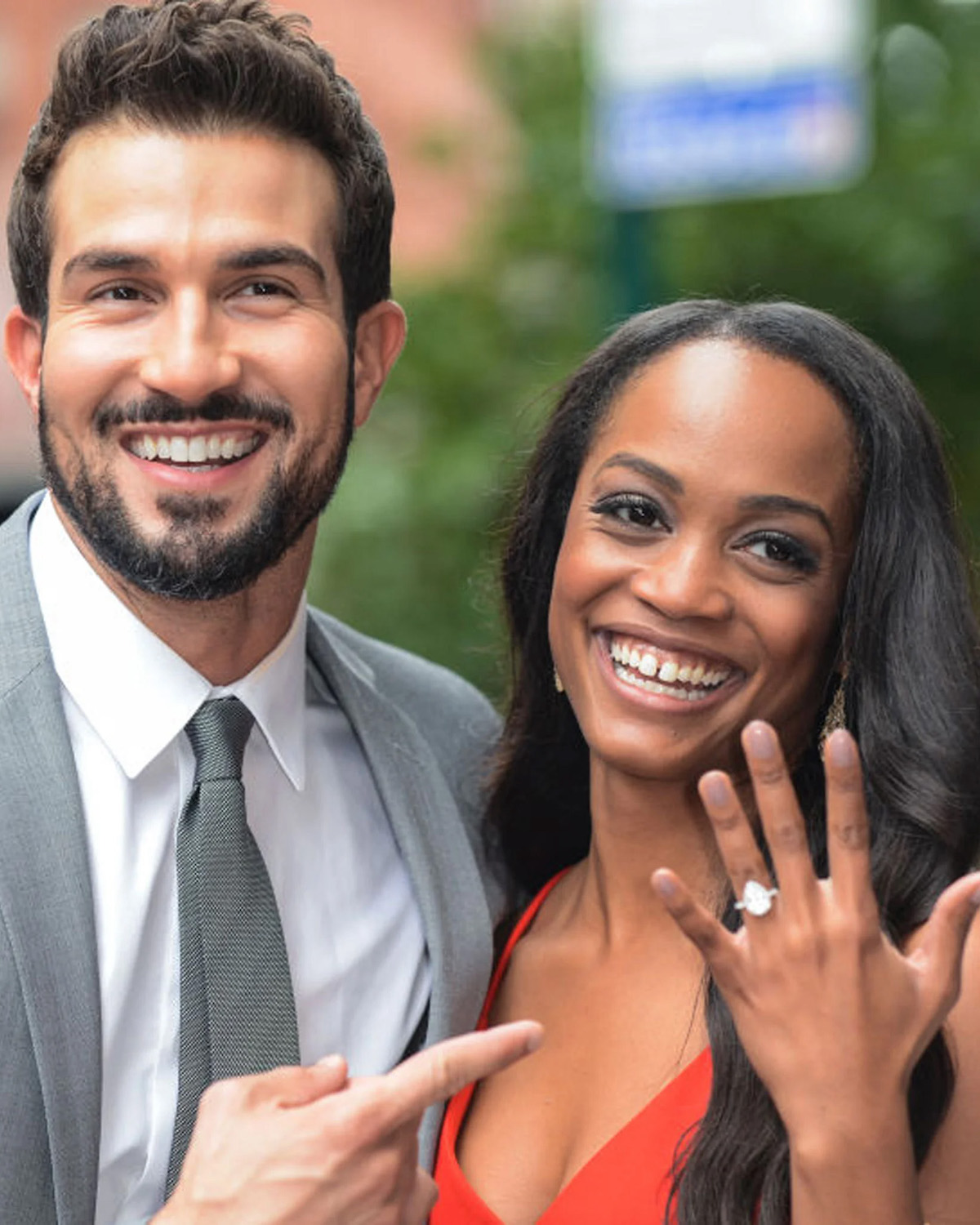 From “The Bachelorette,” Bryan Abasolo with Rachel Lindsay who is wearing her Neil Lane engagement ring in 2017.

Since 2009 when Neil Lane became the engagement ring expert on The Bachelor, he has not only helped grooms choose the perfect jewel on the show, he has also educated the audience about the finer points of engagement ring designs.

Inspired by Art Deco geometry and Edwardian decorative elements, Lane points out design details in his work. He also reviews the finer points of a diamond’s quality and special shapes such as the Asscher or cushion. 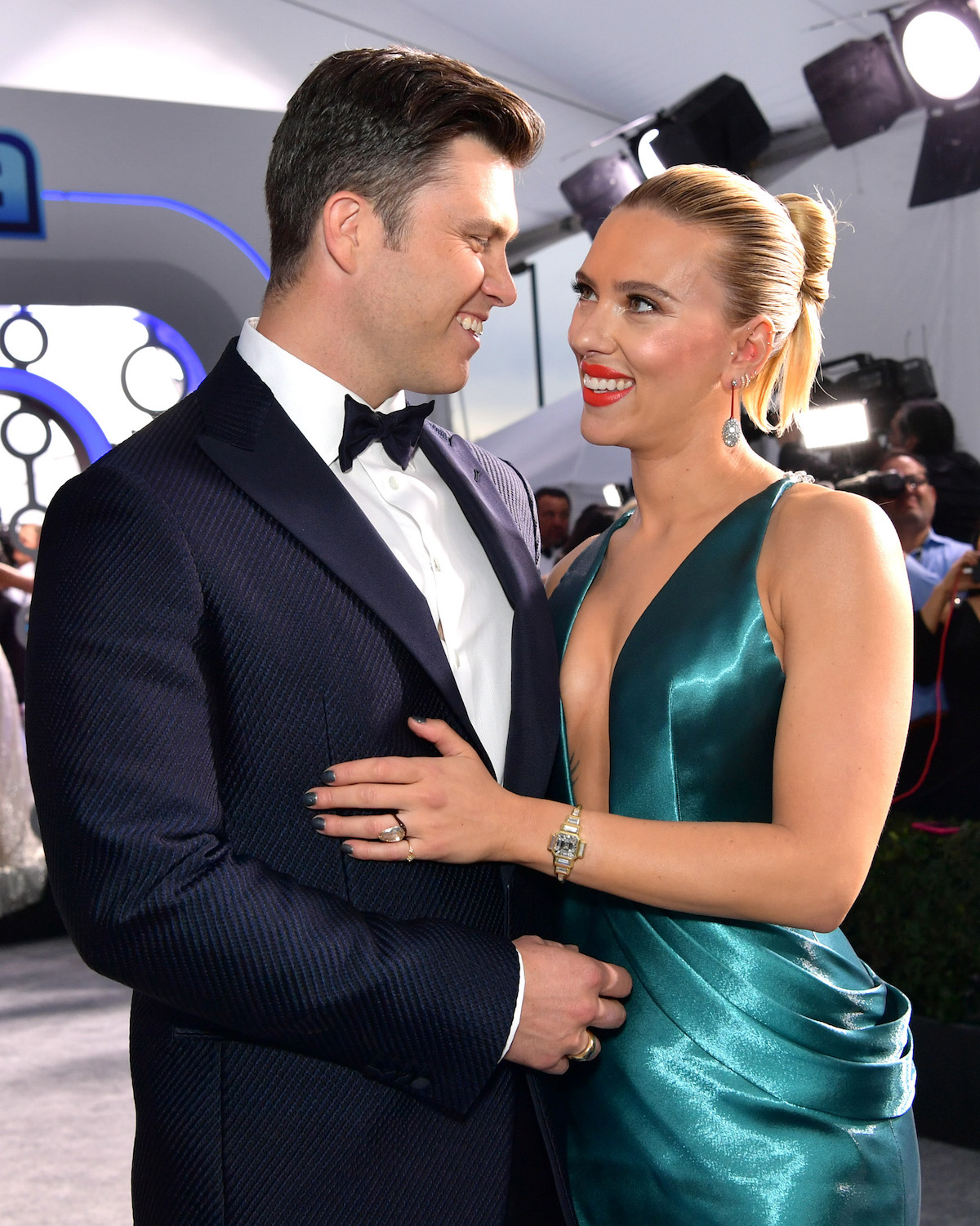 Diamond Engagement Rings Are All About Individuality Today

Colin Jost with Scarlett Johansson who is wearing her brown diamond engagement ring among other Taffin jewels at the 26th Annual Screen Actors Guild Awards in 2020.

More than ever before in the history of engagement rings, today many brides choose styles that have a sense of individuality in the design. The reason for the change is surely the winds of fashion and women’s awareness from press coverage not to mention internet searches that prove a lot of different choices available.

In other words, the ring of your dreams that reflects your personality can be found. For some women, of course this can mean something understated. Jennifer Lawrence wears a gorgeous emerald cut diamond engagement ring that by Hollywood standards is low-key. Individuality in engagement rings can also mean something bold and different.

When Ben Affleck proposed to Jennifer Lopez 20-years after they were initially engaged, he once again chose a fancy-colored (green) diamond. 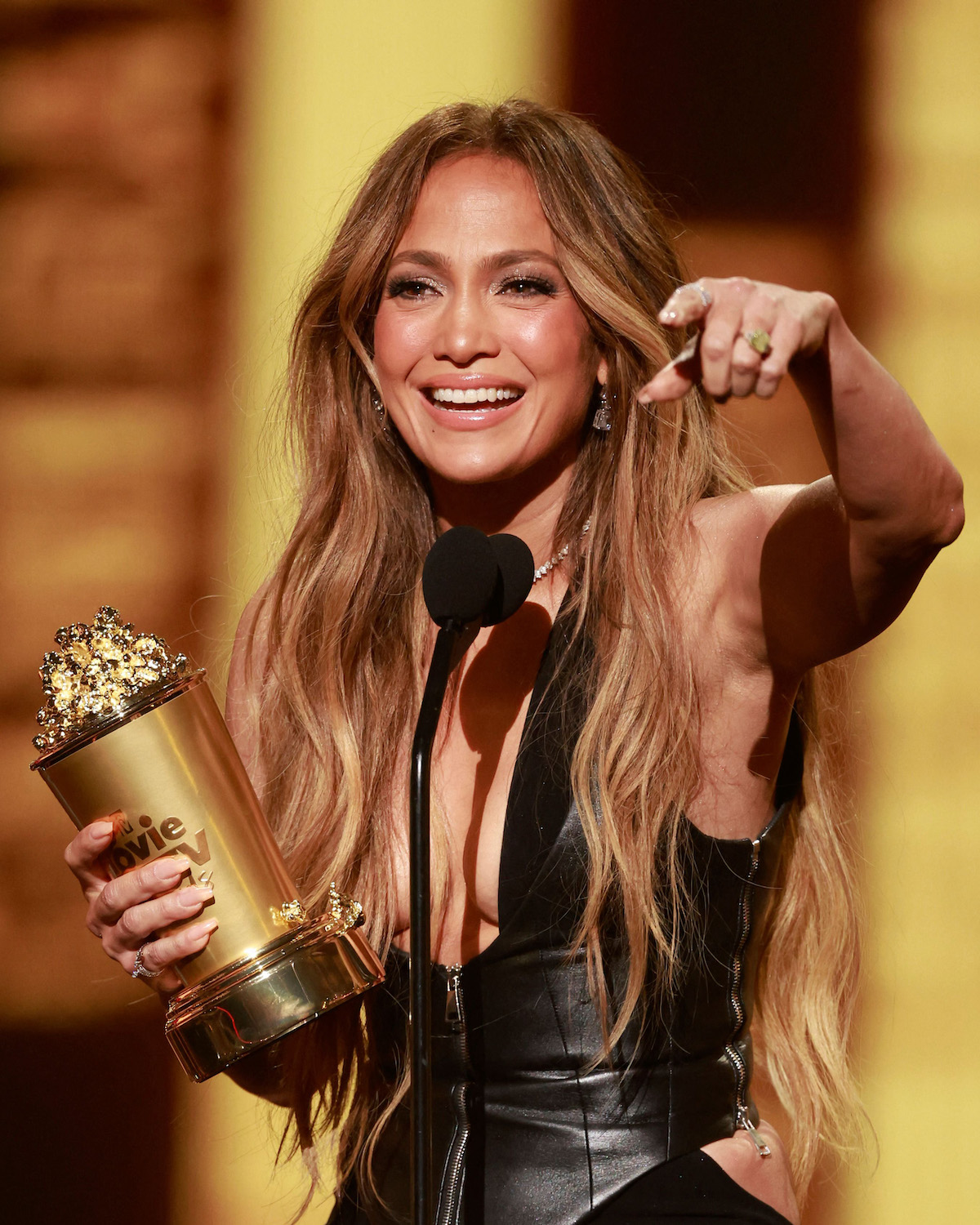 This time the gem was a rare 8.5-carat cushion modified brilliant green diamond. As J.Lo shared when she announced the engagement, “Green has always been my lucky color and now, for sure, it always will be.”